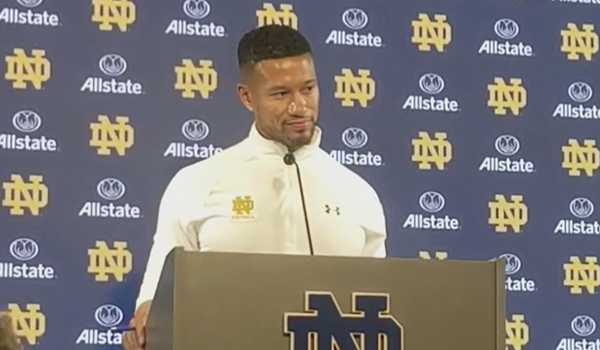 Watch as Notre Dame Football head coach Marcus Freeman talks with the media after battling Marshall. The first few minutes of the press conference were not recorded due to technical difficulties.

MARCUS FREEMAN: All right, again, it’s never easy to come in here after a loss, no matter who it’s to.  It’s disappointing.  We didn’t execute — it comes down to execution.  We did not execute the way we obviously needed to to win this game. We have a lot of — we have to look at ourselves as individuals.  I just told the team that. We all have to look at ourselves starting with the head coach on down and say, okay, what do I have to do, what do we have to do to fix the issues that we’re having, and not just focus on the end result. We have to look at the lack of execution in all phases of our team and where we can improve. Again, it’s disappointing.  We’ve got to take a hard look at ourselves and get back to work and find ways to improve as a football team. With that, I’ll open it up.

Q. You talk about the lack of execution, Coach.  As you look at it, I’m sure obviously you’re going to study it here, what kind of things can you point to?  Did you suspect that you were not prepared to execute on a high level today?

I wish there was a part — like one thing, if we did this, bam, it would happen in the game, but it’s really an evaluation of everything we’re doing, schematically, personnel-wise, everything, to look and say, okay, how can we improve the next time we’re on the field.

Q. As you assess this, you’re an inexperienced head coach; what role do you think that has played in this?

Q. You’ve talked repeatedly since you got the job about this being a team and a program led up front on both sides of the ball.  Two weeks in a row in the fourth quarter, that hasn’t transpired. How close do you feel like you guys are to being that team, and what can you do to help them become that team?

Q. Many of your key leaders on this team are players on both of those units.  How much confidence do you take when there are bumpy waters like this that you have the right guys in place to help get it turned around?

FREEMAN: Yeah, I challenged the leaders. I challenged them, because right now is going to be a difficult time because there’s two situations going to happen.  There’s going to be people that say you aren’t good enough, you guys aren’t a good enough team, and there’s going to be people that say, it’s okay, you did your job.  Neither of those things can creep into our program. We have to stay together, look internally and say, okay, what do we have to do as individuals.  It’s not that I did my job, it’s not that hey, I’m not good enough.  It’s what do we have to do as an individual to improve and make sure we’re in a position to execute Saturday on Saturdays.

Q. Late in that fourth quarter with Drew coming in for Tyler, was that an injury-related thing?

FREEMAN: Yeah, it was injury related. Tyler hurt his shoulder when he got tackled.

Q. In the fourth quarter on another 90-yard touchdown drive, what did you notice there that might have been similar to last week or something new entirely?

FREEMAN: The biggest thing was a lack of tackling.  It’s too many times where run or pass we didn’t get the ball carrier down.  You can’t let an offense drive 95 drive at any moment, but especially not in the fourth quarter when the game is on the line and you’re up and you’re trying to put the game away.

Q. Marcus, what can you do to help these guys?

FREEMAN: I’ve got to be a leader. I’ve got to be a leader.  I can’t sit here and point the fingers at any one person.  You start with pointing your finger at yourself and saying, hey, I’m going to evaluate myself first as the leader of this program and say, okay, where can we improve.  And then we’ve got to challenge everything we’re doing.  We can’t say, okay, guys, just keep doing it the same way and things are just magically going to improve.

No, we’ve got to be very strategic and honest with ourselves and honest with each other, which isn’t comfortable all the time, but we have to be honest and really take an unbiased look and say, okay, are we doing what’s best for this team, do we have the right people on the field, are we schematically doing the things that it takes to have success, because two entire games it hasn’t shown.

It’s shown at points that we’ve done a really good job at points in the game, but the entirety of two games, it’s not where we need to be.  So as a leader, I’ve got to be the first one to look at myself and then we’ve got to really look at what we’re doing and challenge it.

Q. When you feel like you’ve challenged them in the two weeks heading into Ohio State and then into today and it doesn’t work, where do you go from there?  Do you tear it down and start over?

FREEMAN: No, you continue to reassess.  You look at personnel, you look at scheme, you look at where are the mistakes happening.  That’s the biggest thing, okay.  Where is the lack of execution and mistakes occurring and why.

Then we’ve got to figure out, okay, what do we need to do to make sure those things stop happening because that’s what it is.  It’s the lack of execution.  Yes, when it matters the most, but throughout the entire game there’s moments where there’s a lack of execution for whatever reason it is, and we’ve got to look at those moments and say, okay, what do we have to do to fix them.  Is it personnel?  Is it understanding what we’re doing schematically?  Is it the preparation?  Whatever it is, we have to figure it out and we have to address it.

Q. Marcus, is there a concern that Tyler Buckner is being asked to do too much with leading the offense in carries and then also trying to throw the ball all over the field?

Q. How much has the inconsistency of the offensive line affected the ability with play calling?

FREEMAN: I think it’s at all three levels. I’m not going to sit here and say it’s the offensive linemen’s fault. It’s from offensive line to quarterback to running back to wide outs to tight ends.  There’s multiple different levels of lack of execution. But again, we are an O-line driven program.  I’ve said that, and it starts up front, and we know at every position we’ve got to improve, but at O-line, too.

Q. Marcus, in terms of what you saw in August versus what you’ve seen the last two weeks, I’m sure there were some things that maybe you’re like, okay, we have to grow in this area but I know this when the season started.  What are those areas?  But are there also things you’ve seen the last two weeks that have surprised you that you felt were going to be strengths based on what you saw in camp?

FREEMAN: You know, I want to be able to run the ball better.  So we have to look at — we had 130 yards rushing today, but I still didn’t feel like we could run it at will.  So how do we get it to the point where we feel like we can stay consistent and stay in rhythm by the ability to run the ball. We’ve got to hit open wide receivers in the pass game.  It’s not always the quarterback’s fault.  It could be a route, it could be timing, it could be any of the many things that happened which caused the incompletions, but those are things that we have to improve at defensively.

Q. Do you know the severity of Tyler Buckner’s shoulder injury?

FREEMAN: No, they just said he’s out for — he was out for that series or —

Q. But not out moving forward?

FREEMAN:  No, I don’t know.  I have not had any discussion about that.

Q. You said you have to look individually.  What did you see from special teams individually that you’re actually happy with?

FREEMAN: I thought they stepped up.  We challenged the kickoff return unit, and they did a good job of executing.  At the end of the game we had a punt block. We challenged Brandon Joseph, hey, if you’ve got a chance to return a punt, let’s return it, and he did one time today and he got some positive yards. The special teams unit stepped up today majorly, and I’m really pleased with that phase of the ball.

Q. Jarrett Patterson at the end of the game, about as visibly upset as you’ll see a player.  Did you catch wind of that at all, and what do you make of the visceral anger he showed there at the end?

FREEMAN: You know, an ultimate competitor. When you’re a competitive person, man, your emotions when you lose can take control of you, and I didn’t see it, but I’m sure that’s the case.  So as I said to the guys in the locker room, that’s when we need our leadership the most, when things are at the toughest moments, no matter if it’s starting off 0-2, no matter where we go from here. When it matters the most in those toughest and hardest moments, that’s when your leadership has to come out.

This won’t be the last time Jarrett Patterson is in a situation where he’s disappointed, and he has to continue to understand that that’s where you have to be a leader and you have to make sure that everybody is watching you. Same with me.  Everybody watches how you act when things are tough.  When things are good, it’s easy, man. Everybody is happy.  It’s easy to be a leader when everything is going well.  When things are going not so well, that’s to me when the character of leadership will show.

Q. You mentioned guys potentially getting other opportunities or depending on what you guys evaluate with who should get the ball, Chris Tyree didn’t have many touches in this game, only had five at the end and only one by halftime and it was in the last five seconds.  Just your thoughts on being able to maybe use a weapon like that more moving forward?

FREEMAN: Yeah, I mean, we’ll go and evaluate those five reps that he got the ball and see how he graded and what he did.  But Chris Tyree is a guy that I have no hesitation and making sure he gets the ball in his hands.  If we have to find ways to do that and be creative and get the ball in his hands more often, then we’ve got to do it.