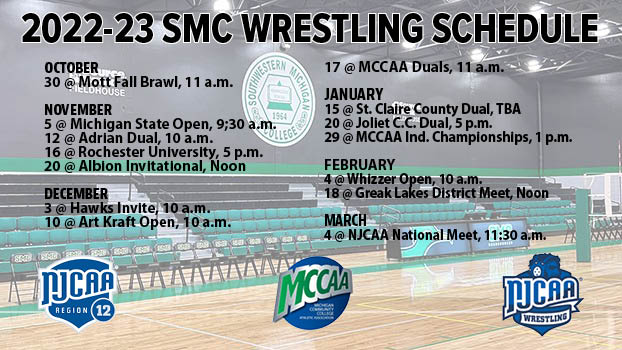 DOWAGIAC — Led by a strong contingent of local wrestlers, the Southwest Michigan College Roadrunners will resurrect the program with their first match set for Oct. 30 at Mott Community College.

After 26 years, Southwestern fielded a volleyball team, which is currently 6-3 this season as it is preparing to return to the court next week.

Women’s and men’s basketball will join wrestling when it returns in October. But unlike the Roadrunner hoop teams, the SMC wrestlers will now have any home matches in the recently completed 1st Source Bank Fieldhouse.

Led by former SMC wrestler and Niles High School Wrestling Coach Todd Hesson, the Roadrunners will kick off the 2022-23 campaign with a trip to Flint to compete in the Mott Fall Brawl.

Southwestern will have five meets in November, including a trip to East Lansing to compete in the Michigan State University Open Nov. 5. There will be five meets in December, highlighted by a trip to Muskegon Community College for the MCCAA Duals Dec. 17.

The Roadrunners will wrap up the regular season with a trio of meets in January and two in February. On Jan. 29, Southwestern will compete in the MCCAA Individual Wrestling Championship in Port Huron. In February, the Roadrunners will travel to Palatine, Illinois, for the Great Lakes District Meet Feb. 18.

The NJCAA National meet will be held in Council Bluffs, Iowa, March 4.