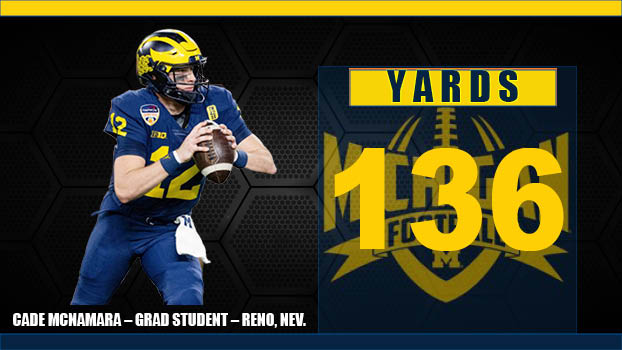 ANN ARBOR — The No. 8-ranked University of Michigan football team started the 2022 campaign clicking on all cylinders, jumping ahead early and rolling to a 51-7 romp of Colorado State at Michigan Stadium Saturday.

The Wolverines totaled 440 total yards of offense on the day [234 rushing, 206 passing], while holding the Rams to just 205 total yards.

Michigan lifted the lid on the scoring for the 2022 season with a 61-yard pass and catch from Cade McNamara to Roman Wilson at the 9:49 mark of the first quarter and never looked back. The Wolverines went on to score 37 consecutive points.

Michigan added on to its early lead thanks to three Jake Moody field goals from 31, 26 and 34-yards, respectively, and a 7-yard touchdown run from Blake Corum. The Wolverines went into halftime with a commanding 23-0 lead.

Michigan continued its dominant defensive effort on the first drive of the third quarter, as Mike Morris forced a fumble and DJ Turner returned it for a 45-yard touchdown to push the lead to 30-0.

U-M’s ground game controlled action throughout the contest with four of the Wolverines’ touchdowns coming on the ground. Corum’s first-half touchdown was added to by a 20-yard J.J. McCarthy scamper in the third quarter, while scores from Donovan Edwards and Alex Orji from within the 10-yard line in the fourth put the exclamation mark on the day’s performance.

Despite surrendering a touchdown in the final quarter, the Michigan defense did not allow the Rams’ offense to enter the red zone in the contest. As a unit, the defense finished with seven sacks, 11 tackles for loss, a fumble recovery and an interception, with Junior Colson leading the Wolverines with 10 total tackles. Michael Barrett added six tackles and a sack, while two of Mike Morris’s three tackles were for a loss to go along with a forced fumble.

McNamara finished the game as the Wolverines’ leading passer, throwing for 136 yards and a touchdown. Alan Bowman threw for 40 and McCarthy 30. Corum was the game’s leading rusher with 76 yards, while Edwards added 64 yards on 13 carries, McCarthy tacked on 50 yards on just three carries, and CJ Stokes added 35 yards on six carries.

The Wolverines had 15 receivers record at least one catch during the contest, with Wilson, Cornelius Johnson and Colston Loveland hauling in two passes each to lead the way. Wilson’s 61-yard catch in the first quarter contributed to his team-leading 65 yards on the day.

Michigan will continue its non-conference home schedule with a matchup against Hawaii next Saturday. Kickoff is scheduled for 8 p.m., and the game will be broadcast live on Big Ten Network.