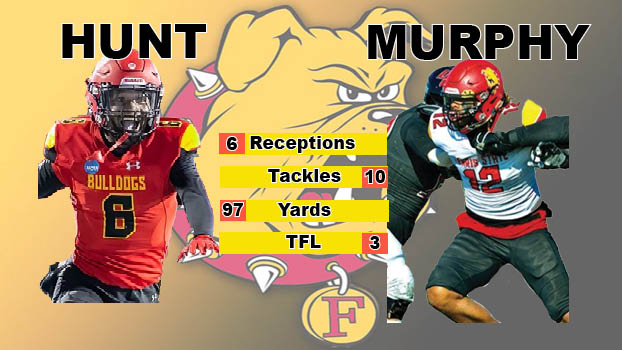 BIG RAPIDS — The reigning NCAA Division II National Champion Ferris State Bulldogs opened the 2022 season with a win as the Bulldogs stretched their regular-season winning streak to 39 consecutive games with a 36-20 triumph over Central Washington on Thursday (Sept. 1) night at Top Taggart Field.

The Bulldogs rolled up 494 yards of total offense and limited the Wildcats to 229 total yards in garnering the victory before a large crowd of 7,101 fans.

Ferris State, which is the nation’s preseason No. 1 team, fell behind early as Jude Mullette converted a 45-yard field goal late in the opening quarter after a Bulldog turnover.

However, Ferris State responded only 1:42 later when senior receiver Xavier Wade hauled in a 64-yard scoring throw from junior quarterback Mylik Mitchell on the final play of the opening stanza to make it a 7-3 game.

Central Washington, a playoff team a year ago, answered as Quincy Glasper found Darius Morrison on a 39-yard touchdown throw early in the second frame to give CWU a 10-7 edge.

Again, though, the Bulldogs came back and regained the lead as senior slot Marcus Taylor found paydirt on an 11-yard run to push Ferris State in front after an eight-play, 78-yard drive.

The Bulldogs pushed the margin to 20-10 when senior QB Evan Cummins reached the end zone from a yard away, finishing a short eight-play, 35-yard jaunt late in the first half.

The Wildcats trimmed the deficit to 20-13 at the break as Mullette converted a 33-yard field goal with 2:17 to go before halftime.

In the second half, the Bulldogs tallied the only scoring of the third period when Mitchell raced into the end zone from 2-yards out after a lengthy nine-play, 60-yard drive. That made it 27-13 going into the fourth.

The lead expanded to 34-13 when redshirt freshman quarterback Carson Gulker scored his first collegiate touchdown with 12:17 left in the game, finishing off an 80-yard march. Central Washington followed with a 10-yard TD run from Glasper with 6:05 left before the Bulldogs earned the final scoring on a safety.

Mitchell threw for 339 yards on 19-of-29 passing for the Bulldogs and ran for a team-high 34 yards on 18 carries. Former Cassopolis standout Tyrese Hunt-Thompson caught six balls for 97 yards and Wade made four grabs for 94 yards.

Defensively, linebacker Konnor Near paced FSU with six stops and safety Major Dedmond had five. The Bulldogs sacked Glasper four times and he was only eight-of-25 in the air for 129 yards.

Ferris State will face a second-straight returning playoff opponent on the road next week as the Bulldogs take on Lenoir-Rhyne on Sept. 10 in Hickory, N.C. Kickoff is set for 1 p.m.