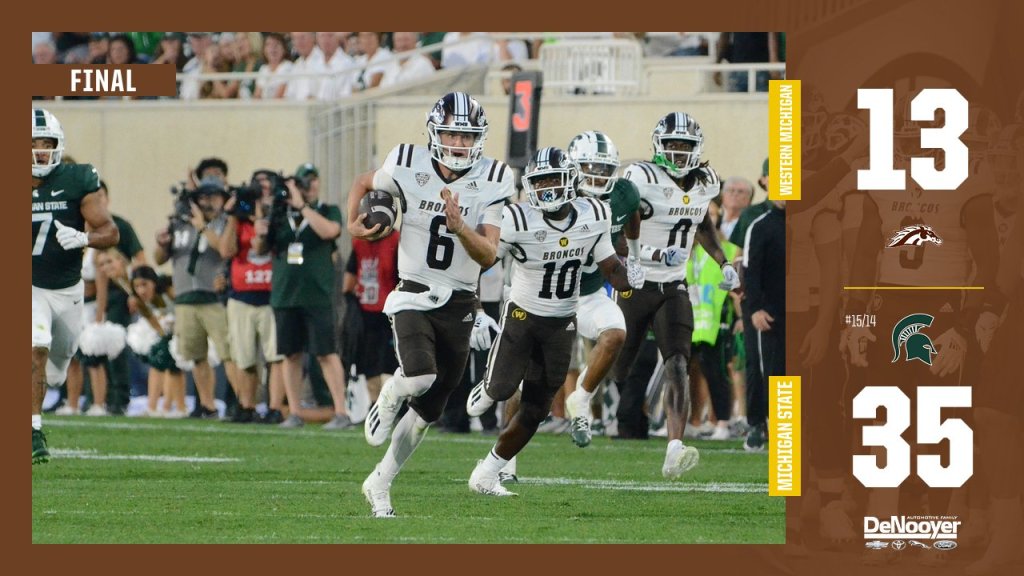 EAST LANSING — Host Michigan State (No. 15/14) scored two touchdowns in less than three minutes in the fourth quarter to break open a close game en route to a 35-13 win over Western Michigan in front of 73,928 fans at Spartan Stadium Friday night.

Junior quarterback Payton Thorne completed 12-of-24 passes for 233 yards and threw four touchdown passes to lead the way for the Spartans, while redshirt sophomore Jalen Berger had 16 carries for 120 yards and one touchdown. Sophomore wide receiver Keon Coleman caught four passes for 84 yards, including one touchdown, while redshirt junior wide receiver Tre Mosley had two catches for 51 yards and a score and freshman Germie Bernard caught a 44-yard touchdown pass.

Western Michigan got on the board first as Palmer Domschke hit a 27-yard field goal with 6:31 left in the first quarter, but the Spartans scored touchdowns on their next three drives to take a 21-3 lead.

Bernard scored his first career touchdown as Thorne connected on a 44-yard score to the true freshman from Las Vegas with 4:37 remaining in the first quarter.

MSU pushed its lead to 14-3 on a one-handed grab in the left corner of the south end zone by Daniel Barker, marking the Illinois’ transfer first career touchdown wearing the Green and White.

The Spartans took a 21-3 advantage on Coleman’s 41-yard touchdown reception with 12:26 left in the second quarter.

Following a Spartan turnover on their first possession of the second half, the Broncos took advantage with a seven-play, 67-yard drive, capped by a Sean Tyler 4-yard touchdown run at the 8:20 mark to make it 21-10.

The Broncos made it a one-possession game on Domschke’s second field goal of the night, this time from 42 yards out with 49 seconds left in the third quarter.

Michigan State responded with an eight-play, 91-yard touchdown drive to take a 28-13 lead. Berger, whose 50-yard run set up MSU in the red zone, finished the drive on fourth down with a 1-yard score, his first TD as a Spartan.

On the next possession, Western Michigan took over with 6:28 on the clock and moved to near midfield before turning it over on downs at its 43-yard line. Taking over with 4:07 left, Thorne threw a pass up the middle on the first play and connected with Mosley for the touchdown, giving the Spartans a 35-13 lead.