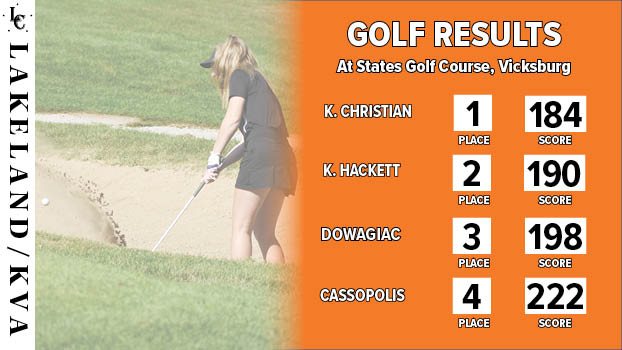 VICKSBURG — The standings in the Lakeland/KVA golf race may shuffle after the top three spots, but things remain the same at the top of the standings.

Kalamazoo Christian, Kalamazoo Hackett and Dowagiac have established themselves as the first tier of the newly formed girls golf league. After that, the running order has continued to shift with each jamboree.

The Lakeland/KVA stopped at States Golf Course in Vicksburg Thursday. Christian won the jamboree with a time score of 184, while Hackett shot 190 and Dowagiac 198.

Cassopolis moved up to finish fourth with a 222.

Kalamazoo Christian’s Jordyn Bonnema has her sights set on being the league’s medalist as she grabbed the honor again Thursday with a 39.

The Chieftains’ Rebecca Guernsey, who won the previous medalist honor, tied for third with a 41, along with Zoe Bronkema, of Allegan, and Kylie Gernaat, of Kalamazoo Christian.

Dowagiac’s Anna Ironside turned in her best performance of the season with a 50, earning her a spot in the top 10.

Cassopolis was led by Devin Hawkins, who shot 54.

The next stop for the Lakeland/KVA is Indian Lake Hills Golf Course as the Chieftains host the jamboree Wednesday.

Buchanan suffered its first loss of the season as the Bucks went 2-1 at the Coloma Quad Tuesday.

Faith Carson had 32 kills with a hitting percentage of .375. She also had 12 blocks. Chloe Aalf added 17 kills, 10 digs and nine aces, while Josie West finished with 15 kills and six digs.

Alyvia Hickok had 70 assists for the Bucks.