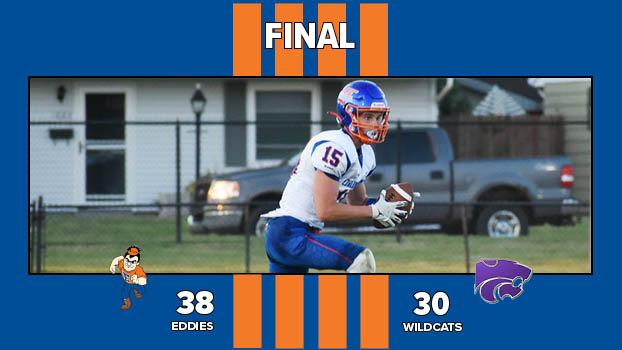 THREE RIVERS — The last time the Edwardsburg football team lost was Wolverine Conference football game was in 2017. The Eddies’ opponent that night was Three Rivers.

The Wildcats came within a whisker of repeating that feat Friday night as it hosted Edwardsburg in the conference opener for the Eddies.

Trailing Three Rivers in the fourth quarter, Andrew Colvin came to the rescue, scoring a pair of touchdowns to left the Eddies to a 38-30 win that extended the Eddies’ Wolverine Conference winning streak to 40 games.

Colvin finished the night with 105 yards rushing on nine carries. He scored touchdowns on runs of 48 and 45 yards.

After jumping out to a 14-0 lead on touchdown runs by Keegan Parsons (13-yard run) and Colton Strawderman (1-yard run), the Wildcats came storming back behind the play of quarterback Caleb Quake.

Quake threw a pair of second-quarter touchdown passes to Andrew Brown, which covered six and 17 yards to tie the game at 14-14 heading into the locker room at halftime.

The two teams traded third-quarter touchdowns as the game headed into the fourth quarter deadlocked at 22-22.

Edwardsburg will look to extend its Wolverine Conference winning streak Friday night as it hosts Niles, which was a 28-18 winner over Buchanan Thursday night.