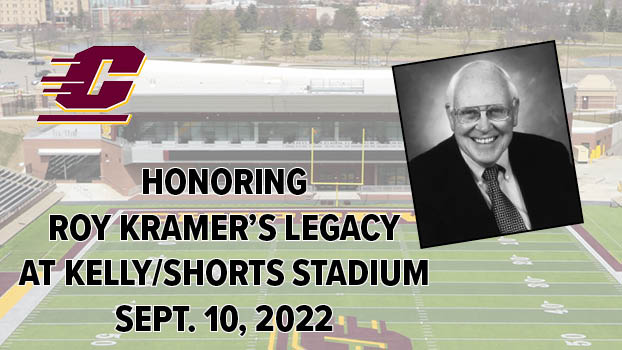 MT. PLEASANT — A pair of former Central Michigan University football coaches with ties to southwest Michigan will be honored Sept. 10 when the field at Kelly/Shorts Stadium will be named after them.

Roy Kramer, who coached the 1957 Dowagiac Chieftains to its first undefeated season, and Herb Deromedi, whose son was a reporter at the Niles Daily Star, will be honored during the Chippewas’ game against South Alabama.

“We are proud to honor the rich tradition and football history at CMU by dedicating this field to coach Roy Kramer and coach Herb Deromedi,” said athletic director Amy Folan in a press release. “The indelible imprint of these two legendary CMU leaders has benefited so many throughout the years and will continue to benefit future generations. It is befitting that this prominent space they helped build will carry their names.”

Kramer, who would go on to become the Commissioner of the Southeastern Conference and play a huge role in the formation of the creation of the Bowl Championship Series, coached the Chippewas from 1967 to 1977, was 83-32-2 over those 11 seasons, winning the Division II National Championship and Coach of the Year in 174.

“It is a tremendous honor, and very humbling, to be recognized alongside my mentor back then, and still now, Roy Kramer,” Deromedi said in the press release. “I am so grateful for my time at Central Michigan and all of the men I was able to coach and all of the people that have been so impactful in my life.”