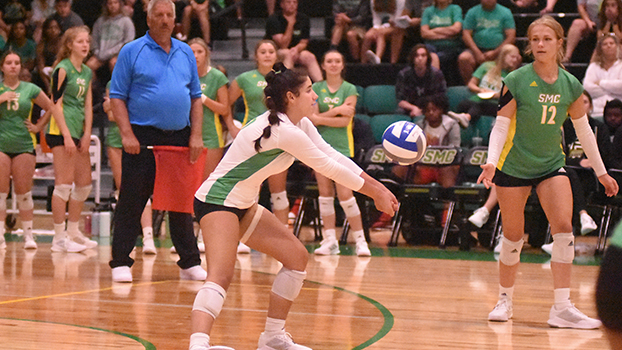 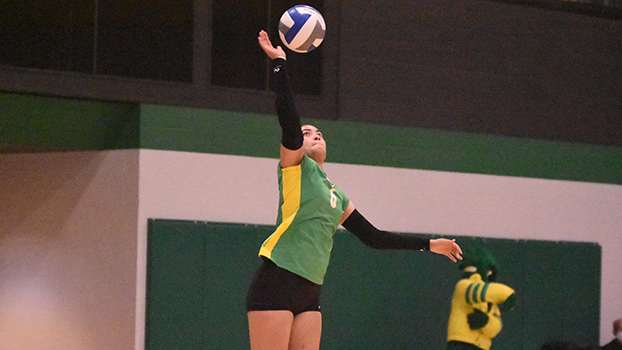 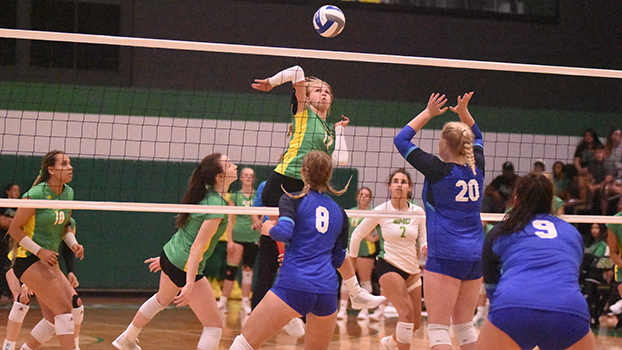 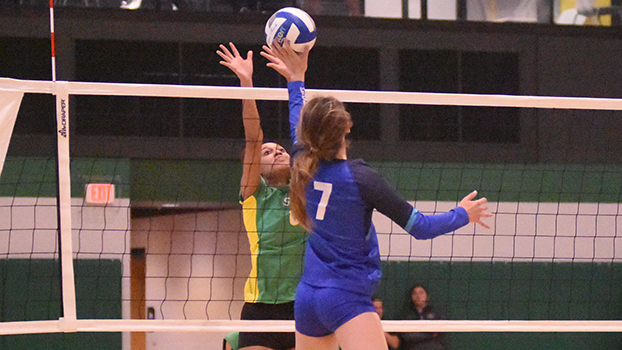 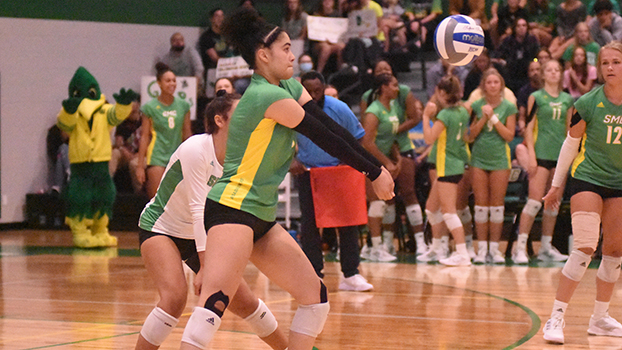 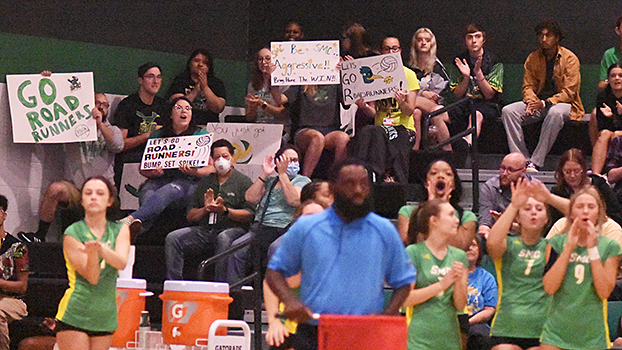 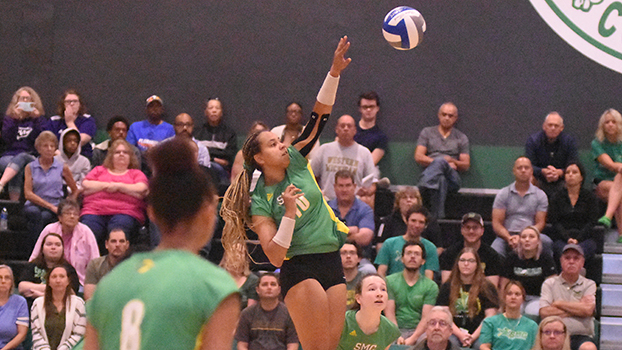 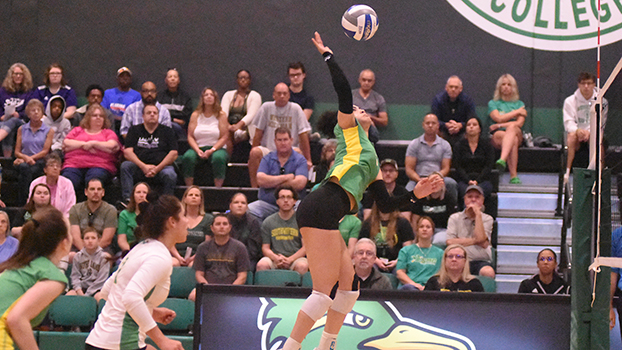 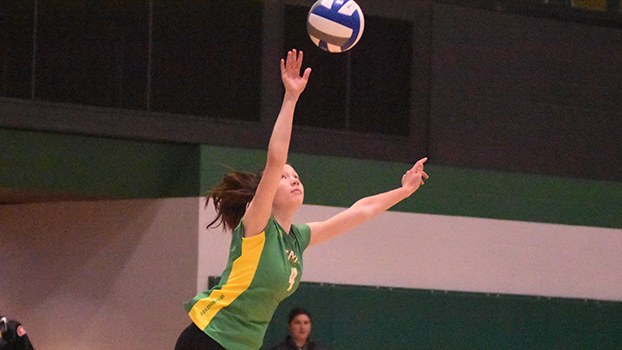 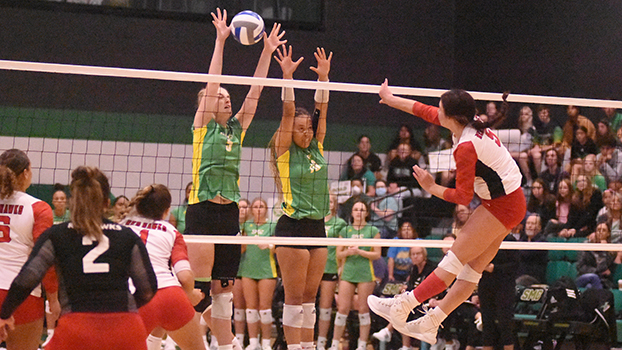 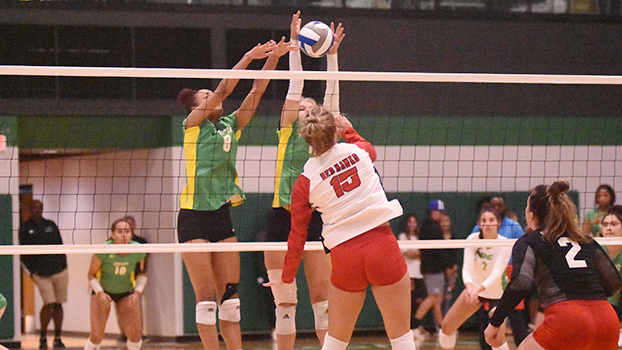 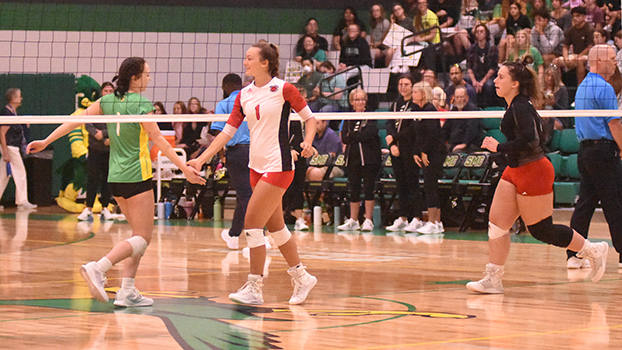 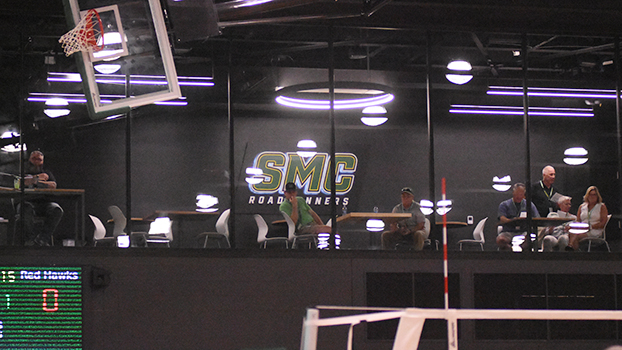 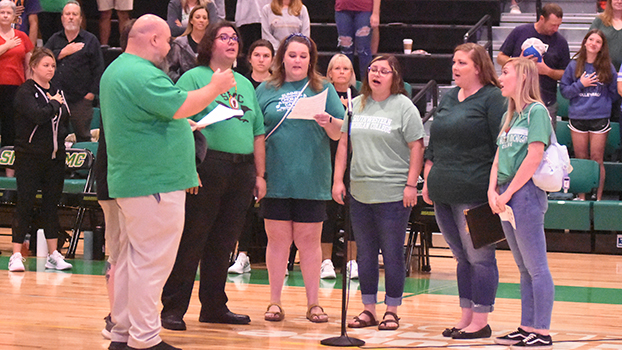 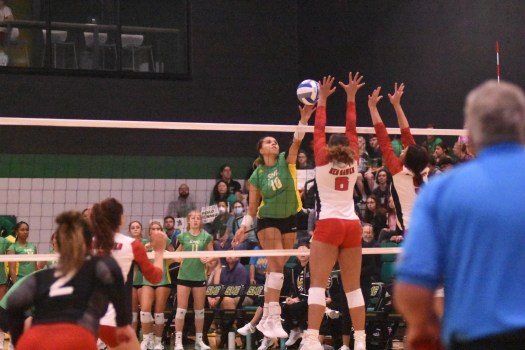 DOWAGIAC — The long-awaited debut of the Southwestern Michigan College volleyball team in the new 1st Source Bank Field was, by all standards, a success Saturday.

The Roadrunners went 1-1 on the day, falling to rival Lake Michigan College 3-1, but rebounding to defeat North Central Michigan College 3-2 in the third match of the day. The Red Hawks swept the Timberwolves 3-0 in the middle match.

Despite wanting to go 2-0 in the first volleyball match at SMC in 26 years, first-year Head Coach Jenny Nate was happy with her squad. Nate, her staff and her team continue to learn about each other through the first handful of matches in which the Roadrunners are 6-3.

“Today was a good day for us,” she said. “The goal was to go 2-0, but I feel good about the direction we are moving in as a team. We came out strong and aggressive against a tough LMC team and took the first set 25-16. We need to learn to maintain that first set energy and confidence throughout every set the entire match.”

After North Central was defeated by Lake Michigan College, the Timberwolves dropped the opening set to the Roadrunners 25-15. Like the opening match of the day against LMC, Southwestern Michigan lost the second set 25-16, but rebounded behind the strong serving of Nikki Nate (Niles), to take the third set 25-18 to grab a 2-1 lead.

The Timberwolves would not go away, winning the fourth set 26-24 to force a fifth and deciding set to 15.

“The North Central match began the same way; we came out aggressive and firing again, took the first set, and then turned around and couldn’t maintain that consistency in the second set,” Nate said. “We did, however, pull it all together for the last three sets taking the win in five down to the wire.”

The Roadrunners got off to a great start only to have North Central battle back. In the end, however, SMC was able to stave off another comeback like the fourth set and end the day with a split.

“That was a great win, and every time we can finish those tight matches, we will build that trust and confidence needed to keep winning,” Nate said.

The home debut was also a success as a large crowd cheered the Roadrunners on. Nate said her team was happy to get the support.

“It was great playing on our home court, and we truly appreciate all the support we had from the SMC staff, other SMC coaches and their teams, players’ families, friends, students and the entire surrounding communities,” she said. “The crowd definitely played a part in our positive energy and exciting runs. We have been together four weeks, and when we are on, we can beat anyone; it’s just going to take time to keep building chemistry and trust one day and one match at a time, and I am so excited to see what this team can continue to accomplish.”

Nate, who served 10 consecutive points in the third set, ended the day with 23 points and three aces. She also had 17 kills, three blocks and 26 digs. Faith Rankin (Battle Creek Lakeview) led the Roadrunners with 23 kills. She also had nine points, a block and 38 digs.

After nine matches to open the 2022 season, the Roadrunners will host a scrimmage against Kalamazoo College, Kalamazoo Valley Community College and Bethel College in the 1st Source Bank Fieldhouse beginning at 6 p.m. Wednesday.