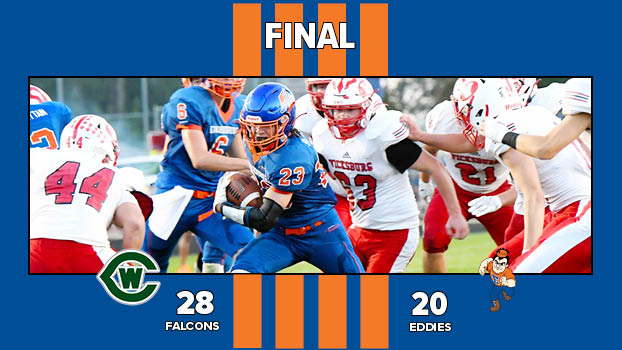 West Catholic’s Tim Kloska, who has committed to Air Force, scored all four touchdowns for the Falcons at Hope College. He scored on runs of 19, 61 and 1 yard, while he also caught an 8-yard pass from Carson Beekman. Kloska finished the night with 161 yards on 19 carries for an average of 8.5 yards per tote.

With 2:28 remaining in the third quarter, Edwardsburg’s Brenden Seabolt reached the end zone on a 1-yard run, but the Eddies missed the extra point kick and trailed West Catholic 28-6.

In the fourth quarter, Mikey Pryor scored on a 6-yard run and Seabolt scored his second touchdown of the night to cut the lead to 28-20. After missing the conversion attempt on the first touchdowns of the quarter, Brett Allen scored the final points of the game on the conversion run.

Andrew Colvin led Edwardsburg with 66 yards on 11 carries, while Brendan Madison had 65 yards on 11 totes and Allen 55 yards on 16 carries.

Allen also led the Eddies defensively with five tackles. Oscar Morris and Brennan Brady-Brittain both had four tackles. Morris and Zac Zache both had interceptions for Edwardsburg.

The Eddies remain on the road this week as they travel to Three Rivers to open their Wolverine Conference schedule. The Wildcats defeated Paw Paw 32-6 Thursday night.