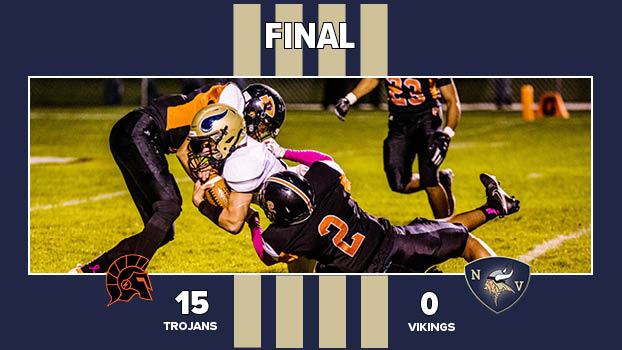 STURGIS — Despite running just nine offensive plays in the first half of its season opener, host Sturgis was able to shutout Niles 15-0 to pick up a Wolverine Conference victory Thursday night.

The Trojans (1-0, 1-0) scored all of its points in the second half. The Sturgis defense was able to keep the Vikings (0-1, 0-1 Wolverine) out of the end zone the entire evening.

Jacob Thompson finally snapped the scoreless tie in the third quarter as he capped a Sturgis drive with a 1-yard run. He then kicked the extra point to make it 7-0.

The score remained that way until midway through the fourth quarter when the Trojans took advantage of a short Niles punt.

Thompson would cap the scoring with a 36-yard run. Sturgis lined up to kick the extra point, but the ball ended up on the ground, which was picked up by Thompson, who found a way to get into the end zone for a 2-point conversion and a 15-0 Trojans’ lead.

Thompson would then intercept a pass to end any chance of a Vikings’ comeback.

Niles did have one touchdown called back due to a penalty, but finished the night being outgained by Sturgis 218-167. The Trojans picked up 203 of those yards on the ground, led by Thompson, who rushed for 147 yards on 21 carries.

The Vikings official play their first home game of the 2022 season, but it will be played at Berrien Springs as construction on the new turf at Viking Stadium is still under way.