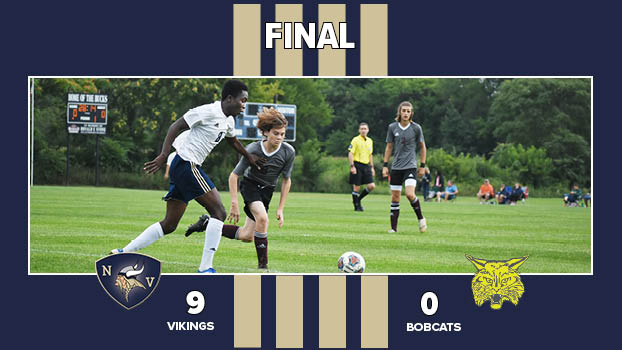 The Vikings (3-1) scored all nine goals in the first half. The match was stopped at halftime by the mercy rule.

First-year Niles Head Coach Scott Riggenbach was glad to see his team finally put some balls in the back of the net.

“During the VanDenBerg Tournament, we outshot our opponents 53-6, but struggled to find the back of the net,” he said. “We have been focusing on finishing for the past few days and it really paid off tonight.”

Levi Haboush, Chris Helfin and Thornton all had assists.

Niles outshot Brandywine 23-2. The Bobcats fall to 0-3 on the season.

“I was proud of the way the boys came out right away tonight,” Riggenbach said. “We talked about getting out fast and they did that scoring two goals in the first five minutes.”

The Eddies continued their winning ways Wednesday night with a 3-1 non-conference win over Lakeshore in Stevensville.

Dion Sokhadze, Owen Kertes and Daniel Carfi had the goals for Edwardsburg, which improved to 5-1 on the season.

The Eddies also won the JV soccer match over the Lancers 4-3.

Lenoxx Myers had a pair of goals to lead Edwardsburg.

The Chieftains came out flat against visiting Vicksburg in a matchup of former Wolverine Conference foes Wednesday.

The Bulldogs took advantage and picked up a 5-0 win over Dowagiac, which was outshot in the contest 20-4.

Travis Renborg had 14 saves for the Chieftains.

“We did not come ready to play today,” said Dowagiac Coach Joey Pasternak. “As a whole group, we were sluggish and had no energy all, starting in the warmup and it continued into the game. We still had some chances to swing the game in our direction but it just wasn’t there today. They got on the gas early, and we couldn’t slow them down.”