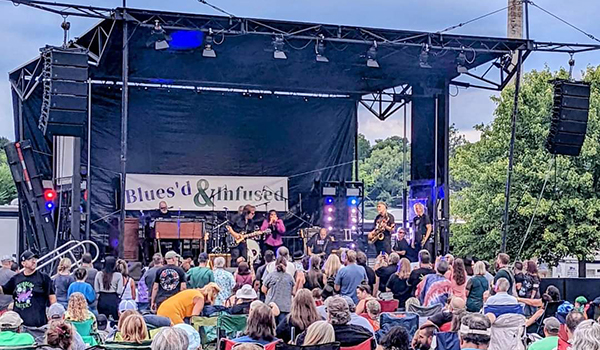 NILES — Music fans, movie buffs and cannabis connoisseurs from near and far journeyed to Riverfront Park South Saturday, Aug. 20 for one purpose.

Hollywood actors Dan Aykroyd and Jim Belushi performed a Blues Brothers concert at Riverfront Park south, near the French Dam on Saturday, August 20 as part of the Blues’d and Infused cannabis music festival presented by Float. The event was co-sponsored by Belushi’s Farm brand of cannabis products, as well as Highway Horticulture Productions.

The band performed a Blue Brothers show with their 11-piece band the Sacred Hearts.

“We’re so glad to see so many of you lovely people here tonight,” Aykroyd said to the crowd. “We would especially like to welcome all the representatives of the ‘Niles’ law enforcement community that have chosen to join us here in ‘Riverfront Park’ at this time. We certainly hope you all enjoy the show. And remember, people, that no matter who you are and what you do to live, thrive and survive, there’re still some things that make us all the same. You. Me. Them. Everybody. Everybody.”

Approximately 1,500 people attended the event, which was well-received by those in attendance.

“I was pleasantly surprised,” said Niles City Council Member Jessica Nelson. “I myself do not partake in marijuana and I’ve never liked it; I think it smells gross. But I did get to go to the festival over the weekend and I was so impressed with how it was run, how peaceful it was, how happy everybody was. I didn’t see anyone complain or talk trash about people that like to partake and I saw people from age 21 up to 80-plus and everywhere in between and it was an amazing event.”

“I want to thank you for all the work that your department has done to help organize and coordinate that so that it could be successful for our city, as well as the event coordinators. I was impressed and I was happy to be proven wrong. I didn’t have big negative connotations, but I definitely had preconceived notions. But it was amazing.”

City of Niles Mayor Nick Shelton was in attendance and enjoyed the show,

“My wife and I attended and had a really nice time,” he said. “It was a very mellow crowd, everybody seemed happy to be there. The festival organizers were doing a great job. Our law enforcement officers were in good spirits, doing a good job vendors. I saw many local vendors and everybody seemed to be having a really good time. The Blues Brothers played some awesome music and we had local musicians as well. We enjoyed it.”

“It was really, really cool to meet the legend, Dan Aykroyd,” he said. “I couldn’t believe I was in the presence of Ghostbuster. And then Jim, of course, is just an awesome guy. It was really good talking to them and meeting them. They were happy to be in Niles.”

The event was the third cannabis festival in as many years, with each festival bigger than the last. Shelton anticipates there will be more festivals to come.

“Those who were concerned about it likely didn’t even know it was going on. (Riverfront Park) was the perfect location for an event like that, kind of off the beaten path and secluded. But it worked well. I’m looking forward to more.”