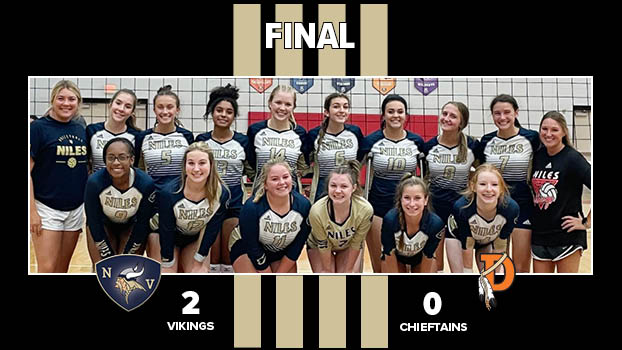 VICKSBURG — After struggling Saturday at the Portage Central Invitational, the Niles volleyball team refocused and went 3-0 to win the Vicksburg Quad Monday.

Niles met Dowagiac in the championship match, defeating the Chieftains 25-13 and 25-21.

“Some parts really came together tonight for us,” said Niles Coach Samantha Zimmerman. “We switched a few hitters with different setters and it really helped their connections. The girls were very disciplined in their play tonight and our passing was very consistent. They brought way more energy tonight then they did this past weekend, and it really helped.”

“The girls played hard this evening,” said first-year Dowagiac Coach Amber Todd. “They did a great job picking up their energy when they needed it. The girls are still learning how to run a new offense and are working hard to get better. We are going to continue to work on eliminating errors, blocking, serve-receive, and putting the ball away.”

On Monday night, a pair of former BCS Athletic Conference teams squared off in a non-league affair.

Complete results are available online at leaderpub.com in the Daily Data section.