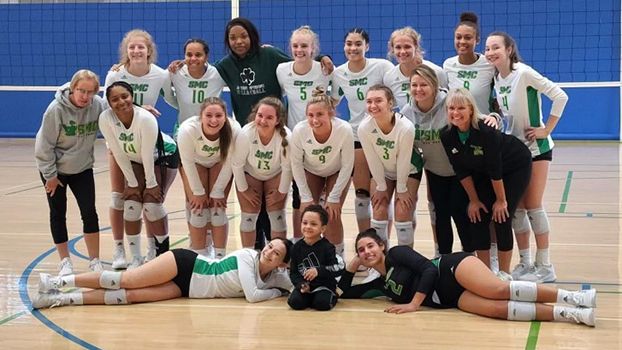 The Southwestern Michigan College volleyball team wrapped up its first competition in 26 years by going 5-1 at the OWT in Rockford, Illinois this weekend. (Submitted photo)

The Southwestern Michigan College volleyball team, playing for the first time in 26 years, ran over their opponents at the Opening Weekend Tournament hosted by McHenry Community College this weekend.

The Roadrunners, with a roster consisting entirely of freshmen, went 5-1 at the largest junior college tournament in the country, falling only to the No. 5-ranked team in NJCAA Division 2.

Southwestern swept Kankakee Community College in its first match Sunday before wrapping up the tournament by winning a five-set thriller against Highland Community College from Illinois. The Roadrunners rallied from a 14-12 deficit in the fifth and deciding set to win 16-14.

“This team can literally do anything they set their minds to. They have been together three weeks today and went 5-1 their opening weekend,” said SMC Coach Jenny Nate. “We have some incredibly intense, talented players, and when they work together, they are a blast to coach and watch play. They have learned to finish sets and win together, and today, I really saw them develop grit. In our final match against a tough Highland team, we were actually down 14-12 and came back and won 16-14. It has taken all 15 players on our roster to have such an incredible start.”

Nate said that it all began with the practice and preparation her squad has put in leading up to the season opener.

“At practice, they all put out in 100 percent effort, and during matches, the energy off the court from our bench feeds the energy on the court, and I love watching them all focus on winning as a total team. We have grown immensely in the past three days, and I’m so proud of all of them.”

Southwestern will follow that up with its home opener Saturday at the 1st Source Bank Fieldhouse. The Roadrunners will face rival Lake Michigan College at 10 a.m. and North Central Michigan Community College at 2 p.m.

“We also know we have to rest up tonight and get back to work tomorrow and prepare for a tough Muskegon team on Tuesday,” Nate said.

Niles’ Emma Beckman had 83 assists, eight points and an ace. Cadence Knight, also of Niles, finished with team highs in points (28) and digs (35). She also had four aces.

More statistics are available online at leaderpub.com in Daily Data.