Roadrunners pick up where they left off with two more wins 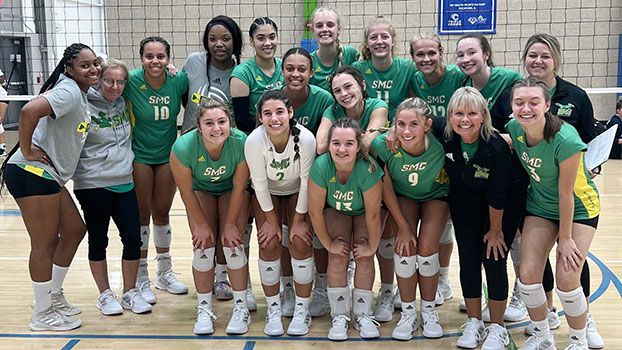 The Southwestern Michigan College volleyball team defeated Illinois Valley and Lake County at the OWT Tournament in Rockford, Illinois, to improve to 3-1 on the seeason. (Submitted photo)

“We had a great day on the court,” said first-year SMC Coach Jenny Nate. “It’s been fun to spend a couple days on the road together. They are really starting to gain confidence and are working great as a team, while also building positive chemistry off the court too. The communication is getting better every match, and all 15 players truly support and cheer each other on.”

Since reviving the dormant program after 26 years, the Roadrunners have hit the ground running. Southwestern has shown that it will not be your typical first-year program. Nate said that the goal this season was not just to be competitive, but it was to win and win right away.

So far, she and her squad have delivered on that goal.

Playing six matches in three days against established programs is exactly what Nate wanted. She can see her team growing each time it steps on the court and learning about what it takes to win at this level.

“The trust is showing up too,” she said. “I love the way they are focused on the next ball mentality — if it’s a kill or a great play — do it again. And if it’s an error — next ball, and make a great play this time. Our intensity and focus was also a major component today, and we were able to rely on every attacker on the court to score. Our defense made some outstanding hustle plays and saves. We put up a lot of tough blocks and our setter did an excellent job spreading the ball around and running the offense. We are looking forward to heading into day three tomorrow and continuing to build on our wins today.”

Southwestern continued to get solid play in all phases of the game.

Emma Beckman (Niles) finished the day with 60 assists to go along with a pair of blocks.

More individual statistics may be found online at leaderpub.com in Daily Data.