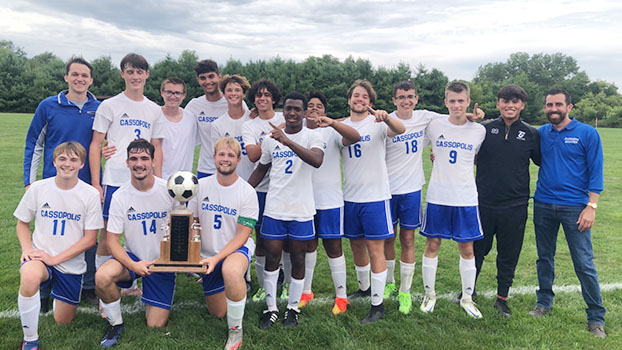 BUCHANAN — For the first time in 12 years, the VanDenBerg Invitational has a new champion.

Host Buchanan knocked out 11-time defending champion Niles in the semifinals 2-1, but it couldn’t bring home the title as Cassopolis (2-0) defeated the Bucks 3-2 in the Championship match Saturday afternoon.

Malachi Ward score the winning goal with just over 11 minutes remaining in the match.

The Rangers, who won their first-even VanDenBerg title, advanced to the finals with a 5-2 win over Brandywine in the other semifinal. The Vikings defeated the Bobcats 3-1 to finish third.

It was the second time in four days that Cassopolis and Buchanan squared off on the pitch. The Rangers defeated the Bucks 4-2 last Wednesday in the season opener for both schools.

The Eddies also brought home a championship Saturday as they captured the David Ni Memorial Tournament title with a 4-1 win over Kalamazoo Central.

Edwardsburg head back to work Monday as it travels to Bangor for a non-league contest.