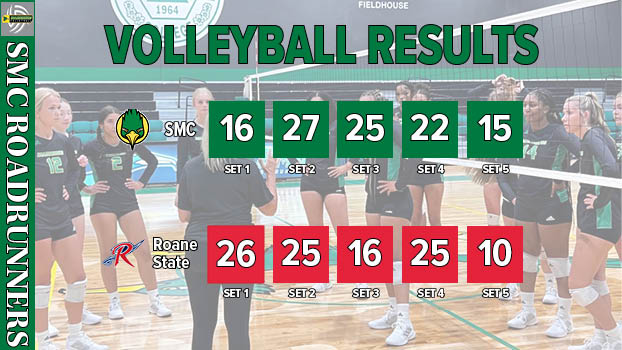 ROCKFORD, Ill. — The return to the volleyball court for the Southwestern Michigan College Roadrunners was a success Friday.

Southwestern can count Friday as a success because, after 26 years, the Roadrunners have revived college volleyball at the community college.

First-year Head Coach Jenny Nate was pleased with her team overall, but also knows there is a lot of work to be done.

“We were beyond excited to compete in this tournament,” she said. “It is the largest junior college tournament in the country, and we knew we would be challenged and get a chance to play great teams and really see where we stand, our strengths and what we need to take back to practice and work on.”

Playing in the Opening Weekend Tournament hosted by McHenry Community College, the Roadrunners quickly learned what it takes to play volleyball at the junior college level.

“We were right there in two of the sets and really started to gel in the third which gave us confidence as a team,” Nate said. “We did a great job scoring and by the third set really started to put up the blocks and get our timing right against their outside hitters.”

The Roadrunners needed five sets to get past Roane State to earn its first collegiate victory since the 1990s.

“It was a battle,” Nate said. “I love that this team plays to win, and despite being down at times, the score doesn’t faze them. They dig in, start to control the runs, kick up the energy, put the ball away and take the set. It’s fun to watch them keep building team chemistry and get stronger as a unit every day.”

“We are excited to get back on the court tomorrow and keep working to improve and keep playing to win,” Nate said.

Complete individual statistics can be found online at leaderpub.com in Daily Data.