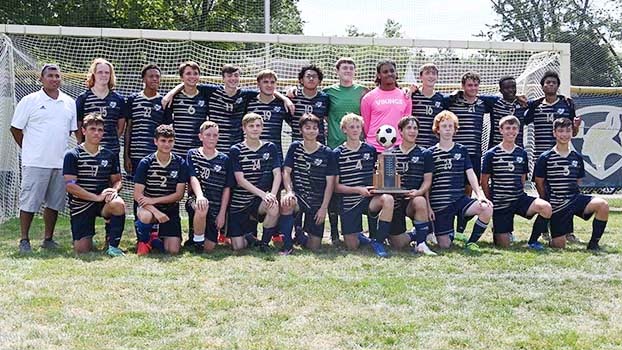 The Niles soccer team will be after its 12th consecutive VanDenBerg Invitational Saturday in Buchanan. (Leader file photo)

NILES — Invitationals are an essential start to any sports season.

The fall sports season is kicking off with several of them this week, including the annual Niles Invitational tennis tournament, the Viking Stampede cross country meet, and the VanDenBerg Invitational soccer tournament.

Here is a quick breakdown of the upcoming invitationals:

The No. 2, 3 and 4 singles matches will be contested at Brandywine High School, while the No. 1 singles, along with all four doubles flights, will take place at Niles High School.

The VanDenBerg Invitational boys soccer tournament has a new home for 2022.

After years of splitting the tournament between Niles and Brandywine high schools, Buchanan will be the new home for the early-season test for the Bucks, Vikings, Bobcats and Cassopolis Rangers.

The move will hopefully bring more fans out to watch the matches as Buchanan has two side-by-side soccer fields at the middle school. The Buchanan soccer field is also named after the tournament’s namesake — Dr. John VanDenBerg.

The Vikings are the 11-time defending championship of the tournament. In 2021, Niles came from behind to defeat Cassopolis 2-1 before defeating Buchanan 4-1 in the title match.

The Bucks are the last team to win the tournament prior to the Vikings’ reeling off their stretch of consecutive victories. That win came in 2009.

The two semifinal matches are scheduled to begin at 10 a.m. The championship and third-place matches are set for noon.

Matches will consist of two 30-minute halves. The tiebreaker will be a shootout.

Admission is $5 online at buchananschools.com/box-office/

Concessions will be available.

Dowagiac, Cassopolis and Brandywine will open their volleyball seasons at the Coloma Early Bird Saturday.

For the Chieftains, it will be the debut of their new coach — Amber Todd, who takes over for Tony Hooley, who retired following the 2021 season.

Dowagiac is in Pool A along with host Coloma, Bloomingdale, Delton-Kellogg and Kalamazoo Loy Norrix.

Pool B will consist of Brandywine and Cassopolis, along with Allegan, Bangor and South Haven.

Brandywine and Dowagiac will both begin pool play at 9:15 a.m. The Bobcats will face Bangor, while the Chieftains will take on Bloomingdale. Dowagiac plays back-to-back matches as it takes on the host Comets at 10 a.m.

Cassopolis will hit the court for the first time at 8:30 a.m. as it faces Allegan. The Rangers take on Bangor at 10 a.m.

Here are the remaining matches for the three teams in pool play:

Admission is $5 per person. No passes will be accepted. Concessions will be available.

The annual cross country opener will begin at 10 a.m. Friday at Madeline Bertrand Park with the boys race, while the girls race will follow at 10:45 a.m.

Admission is $5 per carload.

The Cassopolis cross country team will compete in this unique race, along with Centreville, Constantine, Fennville, Galesburg-Augusta and Union City around the Lawton High School sports complex.

The race has not pre-meet entries, no bibs and no times. It says, “It’s all about racing, placing and meeting the challenge.”