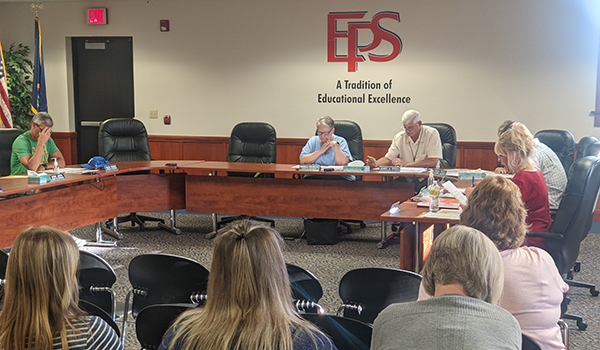 Edwardsburg — Edwardsburg Public Schools is hoping to change the minds of voters and try again to make much needed improvements and upgrades to EPS buildings.

During a special Edwardsburg Public Schools Board of Education meeting held Monday evening, board members voted unanimously to move forward to place a new bond proposal on the Nov. 8 ballot after its initial proposal was narrowly defeated in the Aug. 2 primaries.

“We’re excited to go at this again,” said EPS Superintendent Jim Knoll. “We think we have some good momentum and we listened to the ‘no’ voters and tried to adjust our plan. We’re trying to adjust over the next couple months before we get to November.”

Like the original proposal, a new K-3rd grade building as well as additions to the high school would be the bulk of the bond issues proposed scope of work. The proposed new K-3rd building would combine the resources of the current Primary and Eagle Lake schools into a single building.

The project would consist of:

The board estimates the necessary cost of this project to be $57,735,540. It will be necessary for the district to borrow $56 million for the issue of bonds in the district. Therefore, the remaining funds would be derived from the investment of the bond proceeds.

Edwardsburg Public Schools educates more than 2,700 students who currently attend three elementary schools, one middle school, and one high school. The 28-year bond would be the district’s first in more than 20 years.

“The students and teachers really do need it,” she said. “We do need some new buildings and improvements. I have been in Edwardsburg my whole life; I’m excited about having a new school for the students and something that’s more up to date.”

The bond language approved by the board was presented to the Cass County Clerk’s Office by 4 p.m. Tuesday, Aug. 16 in order to appear on the November ballot.

In the weeks since the primary election, the district has received feedback from voters both for and against the proposal. According to the district as well as those in attendance, a significant portion of voters felt that the proposal should have focused more on academics as opposed to athletics.

“(Focusing on academics) is pretty much what we have done building this to this point,” Knoll said. “Those other things we added on are things we need but we’ll have to figure out another way to get them done at some point. We’re going to focus on safety, transportation and the academic side of it. That’s, that’s going to be the core of what we’re doing.”

During the public comment portion of the meeting, stakeholders suggested that the district change its marketing strategy regarding both athletics and the state of the school buildings.

“One of the biggest complaints I’ve heard was that athletics were still in (the proposal),” said Jason Wilt. “When you’re talking about how you’re marketing, it will be important to explain what that actually means. I think there was a lot of pushback that I just saw out there based on that.”

“I can’t tell you how many people told me that ‘you don’t need a new school because we went to school without air conditioning’ as if that was the only real thing on the issue,” she said. “I couldn’t believe how many people who have not been to Eagle Lake said what a ‘wonderful’ building it was. I think that with that marketing, we really need to make sure they understand it’s not just about air conditioning and that there are some real serious problems with those buildings that can’t be fixed with pennies.”

Knoll added that in addition to an environmental improvement, air conditioning in district buildings would be an important safety improvement.

“People forget that if it’s 85-90 degrees and you have to have your windows open to get some circulation, you’re opening up your building,” he said. “With the issues that we’ve had, in the past and recently across the country, keeping windows closed and locked is something that’s very key. So it’s environmental but it’s also a big safety issue.”

According to Knoll, he and the board will be talking to more stakeholders to get more feedback on what they feel should be done and shouldn’t be done.

“We’ll do the best we can to meet the needs of what the district wants,” he said.