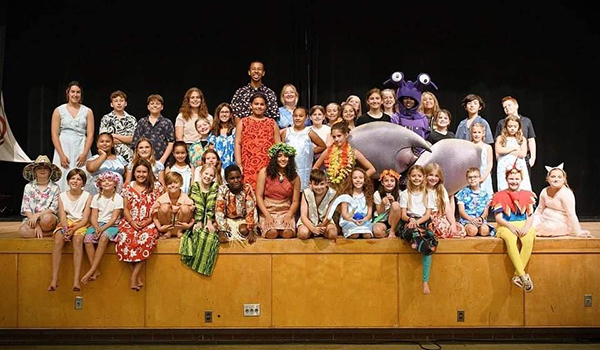 NILES — A chorus of elementary-aged students danced across the Niles High School Auditorium stage for a one-night show Friday, Aug. 12.

URMC was founded in 2019 and provides an opportunity for children to explore music, theatre, and dance in the form of a musical. According to URMC director Meg Bartlett, this year’s group consists of more than 40 students grades 3 through 6, as well as camp alumni who have returned as counselors.

According to Bartlett, the decision to pursue Moana Jr. was a no-brainer.

“It’s my favorite music,” she said. “I knew what kids were going to be joining the camp, and I had that in mind when we made our decision. We said ‘let’s do a Disney show’.”

Upstage Right began the planning process in the Spring. After clearing the music and going through the audition process, campers rehearsed from 9 a.m. to 2 p.m. every day for two weeks preparing for the show.

For Bartlett, seeing the campers having fun bringing the story to life is her favorite part of the job.

“The kids want it. They want to do well,” she said. “They were working their butts off memorizing lines and making everything perfect! We just love seeing it all come together and it’s all them. It’s what they put into it.”