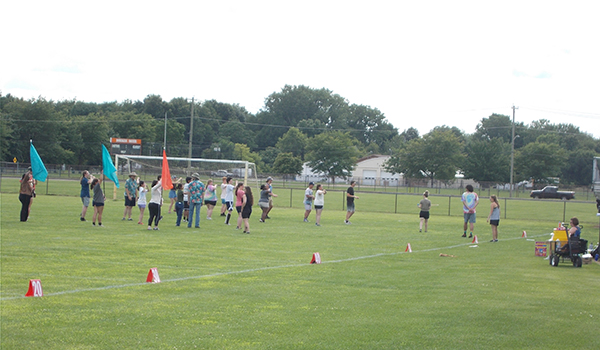 DOWAGIAC — The Dowagiac Union High School marching band is back and ready for action.

The 26-member marching band recently completed its band camp and has been hard at work preparing for its 2022 season under the direction of Music Director Marissa Boynton.

“It’s really nice,” she said. “Marching band is one of my favorite things. It’s definitely nice to get together before the school year gets started. The nice thing about band camp is that you get to do a lot before putting your focus on school and other sports and such. It was nice to reconnect with them after a summer apart, as well.”

After graduating from Michigan State University in December, Boynton was hired by Dowagiac two weeks later. While learning on the fly, Boynton feels both welcomed and embraced by the Dowagiac community.

“It’s a really close-knit community, which I appreciate,” she said. “I do like those closer, more established communities that like the community aspect of everything. It’s been an adjustment because I’m coming in as an outsider and I’m learning what the traditions and values of the community are but so far a lot of the things we believe seem to align and the fans have been really welcoming which I appreciate. Plus they really value fine arts, which is great as a band teacher.”

This year’s show is titled “Music of Queen,” and will feature hits from the popular British rock band including “Under Pressure,” “We Are The Champions” and “Don’t Stop Me Now.”

“One of my goals was to be able to engage the community more,” she said. “We were trying to find something more pop-like, something people could connect with. So many people are excited and the band is really excited about the show this year.”

While pumping up the football team and fans during games is a pivotal role for the marching band, Boynton is also looking forward to her band’s own competitions this year.

“I’m most excited for the competitions,” “They do a lot of these festivals, which I like because it makes us distinct as our own group. I love football games and love the energy and such but the competitions are great because It’s a time for us to show our skills and get feedback. Really excited to see what that’s like with this new group.”