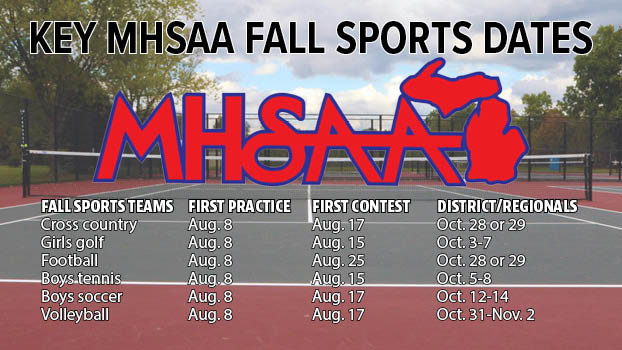 The beginning of a school year always is accompanied by at least a handful of notable playing rules changes or adjustments regarding MHSAA Tournament competition. Among the most noteworthy this fall will be the addition of a “third half” rule in soccer, which will allow an athlete to play in a combined three halves across two matches and multiple levels (varsity, junior varsity, freshman) on the same day, any day of the week. This is similar to the fifth-quarter rules in football and basketball approved in recent years to help programs with low athlete numbers still have enough to continue fielding teams at multiple levels – generally with underclassmen playing on multiple teams to keep rosters filled.

There is also an enhanced penalty beginning this fall for violating the fifth-quarter or third-half rules: Violators must forfeit the contest during which the violation took place (either varsity or subvarsity), and that head coach in violation will be ineligible for the next day of competition.

The change to a playing rule most likely to be noticed by spectators comes in football, where intentional grounding has been adjusted to allow for a passer to throw an incomplete forward pass to conserve yardage – in essence, to throw the ball away to avoid being tackled for a loss, even when a receiver isn’t present near the pass’s destination — if the passer is outside the free-blocking zone, or “pocket,” and as long as the pass reaches the line of scrimmage or extension of the neutral zone beyond the sideline. This change makes the high school intentional grounding rule mirror those at the collegiate and professional levels, and was made to conserve the amount of contact by defensive players with passers.

A second football rule change also was made with safety in mind, as the chop block — which is illegal — was redefined to include any combination block by multiple teammates against the same opponent where one of the blocks is above the waist and the other is below the waist. Previously, the knee (instead of the waist) was the determining factor on a chop block. This change also is expected to assist officials in enforcing the rule because deciding if blocks occur above and below the waste is more straightforward than using the knee to decide if an infraction occurred.

Another football rule change will be noticeable during the MHSAA 11-Player Finals, as head coaches for the first time will be allowed one challenge per game, with the play in question then reviewed with video replay. The challenge will cost that team a timeout if the original outcome is confirmed. Coaches will be allowed to challenge the following: complete/incomplete passes, if a runner/receiver was in/out of bounds, a runner who is ruled not down, the forward progress spot as it relates to the yard to gain, which player first touched a kick, the recovery of a ball in/out of bounds, if a pass was forward or backward, and penalties for illegal forward pass, targeting or illegal helmet contact, and pass interference only as it relates to the pass being previously tipped. All potential scores and turnovers will remain automatically reviewed by replay booth officials.

There is a new qualification process for divers seeking to advance to Lower Peninsula Finals. In each of the three divisions, each Regional will be guaranteed 10 qualifiers for the Finals, with six more “floating” qualifier entries to be distributed to the Regionals that have one of the previous year’s top six returning Finals divers in their fields. If a team changes division from the previous season, any floating top-six spots are added to the six already allowed in the school’s new division.

In golf, the maximum number of strokes allowed per hole during MHSAA Tournament play has been reduced from 12 to 10. Also, teams will be allowed two school-approved coaches to be present and actively coaching during postseason rounds.

In tennis, the number of players who may be seeded at No. 1 singles was increased to seven if there are between 21-23 players in the field, and eight if the field includes 24 or more players at that flight. The No. 1 singles flight is the only flight that allows for individual qualifiers from Regional play, often making it larger than the other seven flights at the Finals.

The 2022 Fall campaign culminates with postseason tournaments beginning with the Upper Peninsula Girls Tennis Finals during the week of Sept. 26 and wraps up with the 11-Player Football Finals on Nov. 25 and 26. Here is a complete list of fall tournament dates: