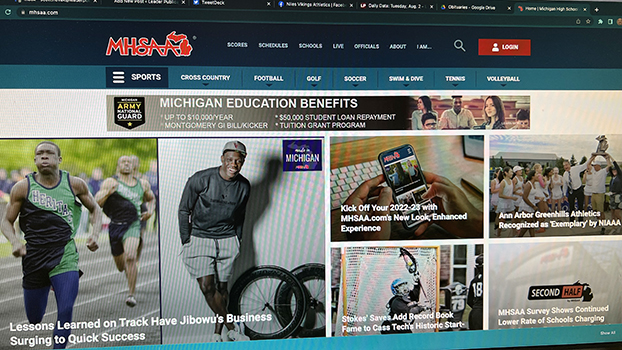 EAST LANSING — The Michigan High School Athletic Association has kicked off the 2022-23 school year with the introduction of a redesigned website — www.mhsaa.com — that has been upgraded to provide more informative and easier-to-navigate experiences, with significant improvements for users who visit the site via their smart phones.

The MHSAA had operated under its most recent website version since August 2009, with the introduction of its “Second Half” website in January 2012 that has provided editorial coverage of Finals for all 28 MHSAA-sponsored sports and feature stories from every region of the state.

“Second Half” has been discontinued — with that editorial content now dominating the front page of the relaunched MHSAA.com website. Pages dedicated to specific sports and individual schools also have been redeveloped to make finding schedule and tournament information easier. The site’s navigation has been reorganized to make surfing the site smoother and more straightforward.

Additionally, the site has been redesigned to be viewed seamlessly on mobile devices — which are the source of 70 percent of MHSAA web traffic.

“For 25 years, we’ve worked to provide important and timely information to our member schools, their families, officials, media and more through a robust web presence on MHSAA.com, and we expect our users to have their best experience yet when they visit the new site,” said MHSAA Executive Director Mark Uyl. “The new MHSAA.com showcases Michigan school sports, while making it easier for visitors to find what they need to be part of the action as a participant or fan.”

All of the features from the previous version of MHSAA.com are included on the relaunched site — several of them enhanced — although historic data will be gradually re-uploaded during the coming school year.

The 2009 redesign added a scoreboard function, and MHSAA.com has become a go-to site especially on regular-season football nights and during District and Regional competition in all sports as scores and results are updated soon after their completion. The site also is the home for MHSAA football playoff-point information and Michigan Power Ratings (MPR) data used to seed basketball, soccer, hockey and boys lacrosse tournament rounds.

The “Second Half” site has built a robust following as well, with regional and tournament reports augmented by additional features including coverage of the MHSAA’s “Battle of the Fans” and MHSAA/Farm Bureau Insurance Scholar-Athlete Awards and recognition of top individual and team performances in coordination with the MHSAA’s well-followed social media channels.

One of the most useful starting points on the new site will be the “I AM …” link located in the navigation at the top of the home page, which provides avenues to explore relative to a visitor’s role as a coach, administrator, official, student, parent or member of the media.

MHSAA.com also is a regular destination for school athletic administrators, and the tools provided — while mirroring the site’s new look — remain unchanged with this upgrade.