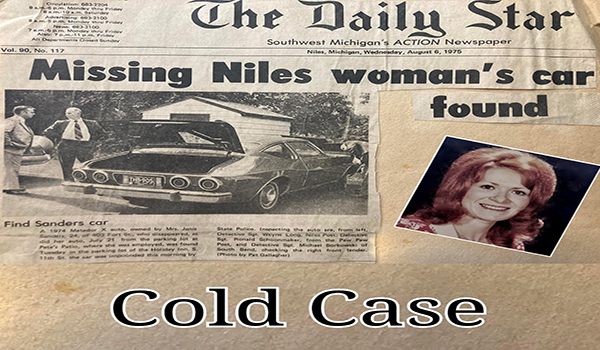 NILES — James Sanders was just two years old when his mother disappeared. For years, both he and his older sister have been searching for answers.

“People have told me what a wonderful person she was,” Sanders said. “It’s bittersweet but it’s nice to see people alive who knew her as a person, a 20-year-old girl.”

Janis Sanders was 24 at the time she disappeared in 1975. Investigators believe the Niles woman was kidnapped and murdered, although her body has never been found.

Now living in Arizona, Sanders said he resumed his investigation in May, enlisting the help of Detective Sergeant John Moore of the Michigan State Police Special Investigation Section to look into the case. Moore was a key member of the team that was able to solve the 35-year old Roxanne Wood cold case earlier this year.

“He’s amazing,” Sanders said of Moore. “He’s making it a priority to solve it. Since it’s not an active case, we’re all volunteers. He’s doing a great job spending time on it.”

“The case was inactive for years,” Moore said. “We do have Janis Sanders still missing in (National Missing and Unidentified Persons System) as a missing person. We want to put in as much effort as we can.”

According to the police reports, Janis was last seen leaving her waitress job at Pete’s Patio Restaurant in Niles close to midnight on July 20, 1975. Her estranged boyfriend, Gerald Casimer “Jerry” Libertowski Jr., followed her out of the restaurant. She had ended their relationship the week before and moved back in with her parents in South Bend, Indiana. She has never been heard from again.

Janis Sanders was reported missing by a family member on July 21. On August 5, her AMC Matador was found parked in the parking lot of the former Holiday Inn of Niles but there was no sign of her at the scene.

In 1976, Libertowski was charged with her murder as well as the murder of Janeice Langs, another girlfriend of his who disappeared in 1973 and was never found.

He was later acquitted of Langs’ murder, and the charges in Janis Sanders’ presumed death were dropped for lack of evidence. Authorities continue to believe Libertowski was involved in both women’s disappearances. He died in 2010 at the age of 67.

While Sanders is certain Libertkowski was the culprit, Libertkowski’s passing has hindered efforts to gather evidence and find Janis’ remains.

“With the research we’ve done so far, we know he did it,” Sanders said. “Police are certain it’s the same suspect for both cases. The recovery of remains would be a big deal. If we find one of them, we’ll find both of them.”

Moore concurred. “We know who committed the crime, just don’t know where the victims’ bodies were discarded.”

Sanders and Moore have submitted all relevant police records to Western Michigan University’s Cold Case Program. According to its website, WMU’s Cold Case Program is a hands-on academic program that helps prepare students for professions in law and law enforcement. Students accepted into the program receive training in forensic science, law and criminal investigation tactics. They then collaborate with the Michigan State Police to examine cold case homicide files and in the process, gain investigative skills.

The program played an important role in solving the Roxanne Wood cold case.

“(The program) is working on making the police reports PDF searchable,” Moore said.

Moore believes that advancements in technology have led to more cold cases being solved and hopes it will help in Janis Sanders’ case.

“In 1975, we didn’t have cell phones and social media,” he said. “Now, everything can be disseminated so quickly. We think someone out there knows something.”

To help solve his mother’s cold case, Sanders created Cold No More for Jan, a 501c3. All donations and sales are used towards the expenses required to solve a cold case, including a reward for information regarding the case.

“It might take that in order to get someone to say something,” Sanders said. “We’re hoping that money will talk. I want to reach out to people’s hearts and humanity. Even if it is a tiny bit of information, it could be something to pique the judge’s interest for a search warrant. We want to recover the remains and bring closure to my family.”

Sanders and Moore encourage anyone with information on this case to call the Michigan State Police Niles Post at (269) 683-4411.