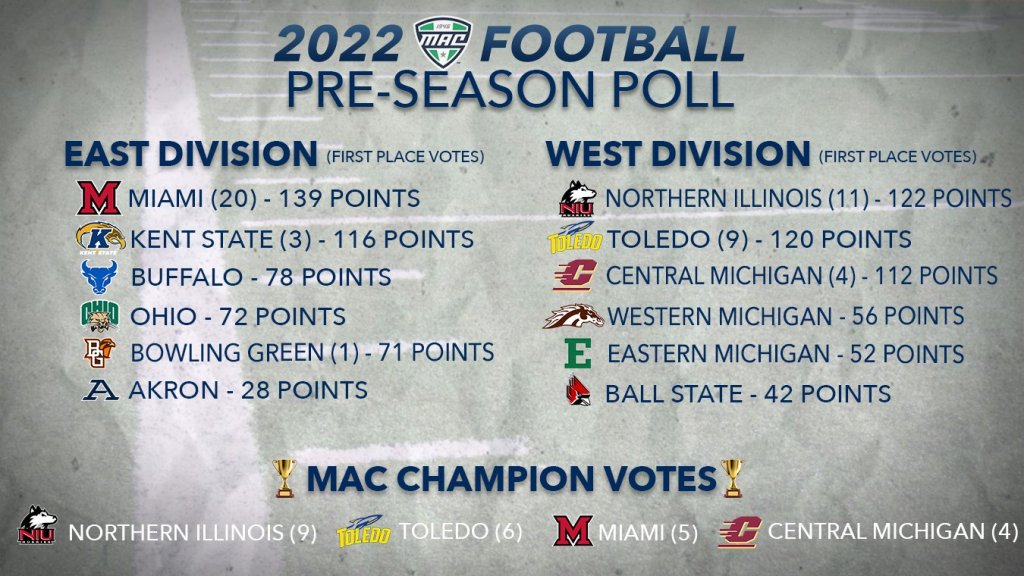 CLEVELAND — Northern Illinois and Miami have been selected to win their respective divisions in the 2022 Mid-American Conference Football preseason media poll.

The poll was announced at the league’s annual MAC Football Kickoff at House of Blues in Cleveland and was determined by a 24-member MAC media panel. NIU was also selected to win the 2022 MAC Football Championship Game.
Miami garnered 20 of 24 first place votes in the East Division and finished with 139 points. Kent State was second (116 points), followed by Buffalo (78), Ohio (72), Bowling Green (71) and Akron (28).
Northern Illinois was picked to win the West Division. The Huskies finished with 122 points, followed by Toledo (120), Central Michigan (112), Western Michigan (56), Eastern Michigan (52) and Ball State (42).
The Huskies claimed their sixth MAC football championship last season after turning in one of the best turnaround seasons in the Football Bowl Subdivision. Northern Illinois posted a nine-win season after going 0-6 during the COVID-shortened 2020 campaign — becoming the first FBS program to win its league championship game one year after going winless. The Huskies return a total of 18 starters off that Championship team.
Miami returns 16 starters from a squad that went 7-6 overall and captured the Frisco Football Classic in 2021.

Quarterback Brett Gabbert, who was named to the preseason watch list by the Maxwell Award and Davey O’Brien Award, is one of eight starters returning on offense. Gabbert threw for 2,648 yards and 26 touchdowns last season. Defensively, Miami returns five starters, highlighted by Matthew Salopek and Ryan McWood. Salopek was second on the team with 112 tackles and McWood returns for his seventh year after missing most of 2021 with an injury.
The 76th season of MAC football kicks off on Thursday, Sept. 1 and concludes with the 2022 MAC Football Championship Game at Ford Field at noon on Saturday, Dec. 3 on ESPN.