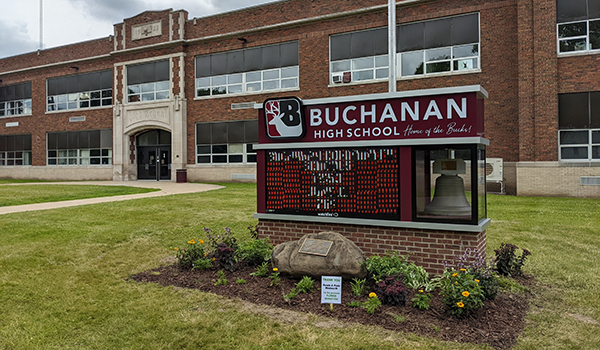 Buchanan Community Schools announced in a July 12 post to its website titled “New Leadership FAQs” that Brian Pruett has been named principal of Buchanan High School for the 2022-23 school year. Mark Frey will be the assistant principal.

Pruett earned his Bachelor of Science and his Master of Education degrees from Grand Valley State University and has served Buchanan Community Schools for 19 years. He started in 2003 as a middle school core teacher and has spent the past eight years serving as the assistant principal for Buchanan High School. Pruett served as the assistant principal and has coached various sports.

The news comes just weeks after Pruett was named the new principal of Moccasin Elementary School. That position is now open again and the district is accepting applications. Former BHS principal Stacey DeMaio, who was named the high school’s assistant principal last month, has resigned, according to Superintendent Patricia Robinson.

“Recent changes in the high school leadership have caused us to look at roles and assignments a bit differently,” the post reads. “Changes are made based on identified needs and what is best for the district as we move towards meeting the goals of the strategic plan.”

The Moccasin Elementary School Principal position is now open again and the district is accepting applications. While the athletic director and Buchanan Virtual Academy positions previously held by Frey are also open, Frey will continue to facilitate the CTE courses at the high school and coordinate with the other schools in which BCS students participate and will also continue to be the varsity football coach.

While the district cannot say there will not be additional changes in leadership, its goal is to have a full staff for the beginning of the 2022-23 school year.