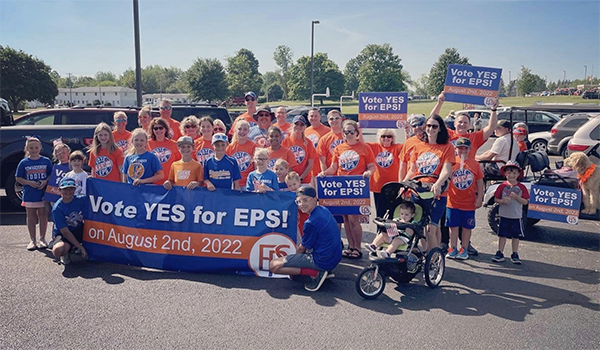 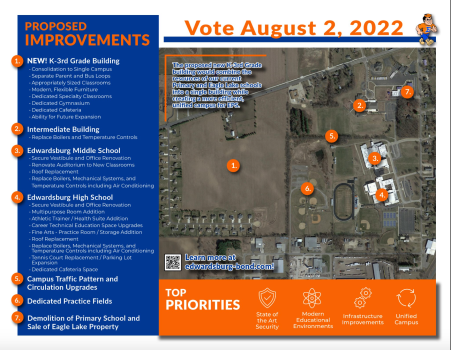 If approved by voters on Aug. 2, the ballot proposal would allow the district to sell bonds and generate approximately $59.6 million with a 2.5-mill net increase over the current tax rate of 3.4 mils.

In the Zoom meeting, Knoll went through the proposal presentation and responded to questions from the public.

According to Knoll, the 28-year bond would be the district’s first in more than 20 years.

“This is not a lightly-thought-out plan. This is something that’s been going on for three years,” Knoll said. “This is the future of (EPS) but it’s also a big part of what’s happening in our district and in our community and this is the legacy that we can leave for the next five to ten to twenty years because that’s the scope of this plan. This is not a one-shot deal; this is the first step in a five, 10, 20-year plan to make sure the schools remain in great shape for the kids that are coming in for the people that work in them but also to support the community, so that it can continue to grow.”

If approved, the projects are expected to be fully completed by 2026.

“When I talked to the builders about this the first time and I asked that question, they said if it weren’t for COVID and the supply chain wasn’t so bad, this would be a three-year project,” Knoll said. “It’s now a four-year project because of all the issues. So, unfortunately, we’re fighting that now.”

A new K-3 building as well as additions to the high school would be the bulk of the bond issue’s proposed scope of work. The proposed new K-3 building would combine the resources of the current Primary and Eagle Lake schools into a single building while creating what the district hopes will be a more efficient, unified campus. Primary would be demolished and the Eagle Lake property would be sold.

The driveway entrance for the proposed K-3 building would be off US 12, a decision, according to Knoll, determined by the Michigan Department of Transportation.

“The reason for that is because there’s a proposed development on the north side of US 12 that may come about in the future and what (MDOT) wants to do is link this intersection with the northern development,” Knoll said.

When asked about potential speed limit changes on US 12 near the proposed school, Knoll said the speed limit would be reduced further west.

After being asked where the funding comes from if the project goes over budget, Knoll responded by saying that going over the budget isn’t an option.

Another question asked by a viewer was which part of the project would begin first.

“I think it will depend on what our input is, but it’ll also be on delivery of what’s done. It’ll be on the least amount of disruption for the students. It will be based on safety and security, because this opens your campus a little bit to people coming in and out. I’ve said this before, but I’ll remind everybody that the builders check the background of all their employees who come on campus, of course, we’ll make sure that we have our supervising people around pretty closely when everything’s going on.”

Knoll believes the proposed bond will improve property values for the community.

“I think everybody knows Edwardsburg is a very desirable community,” he said. “The reason it’s a very desirable community is because we have a really nice school system and we have some really nice lakes. I think those are the two big reasons we have the very nice value that we get out of our homes. You really want to try to keep your home values up, and one of those ways is making sure that the school system stays in great shape.”