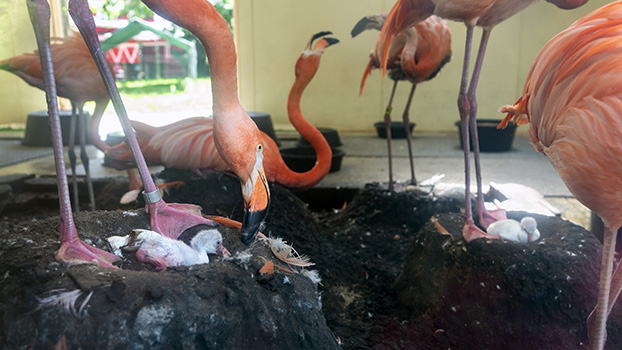 The Potawatomi Zoo announced Wednesday that two flamingo chicks have hatched at the zoo. This is the first time the zoo has had two healthy flamingo chicks at once. (Submitted photo)

SOUTH BEND — The Potawatomi Zoo announced Wednesday that two flamingo chicks have hatched at the zoo.

This is the first time the zoo has had two healthy flamingo chicks at once.

“It’s remarkable that we’ve been able to start a successful flamingo breeding program here at the zoo,” says Josh Sisk, executive director of the Potawatomi Zoo. “Flamingos don’t typically have fertile eggs with flocks that are smaller than 20 individuals, and this year, we have two different females that have successfully hatched chicks.”

Both chicks hatched under unusual circumstances.

Flamingos are usually monogamous during mating season, and both parents take an active role in sitting on the egg and feeding the chick. However, the first chick was hatched by Cherry Blossom alone. The father is unknown.

“Flamingos sometimes switch partners, but Cherry Blossom doesn’t have a partner right now. There are two males we suspect might have fathered the chick,” says Jami Richard, curator of animals at the Potawatomi Zoo. “It’s uncommon for a single parent to raise a chick, but Cherry Blossom has been a great mom so far, and we have every reason to think she’ll succeed, even without a partner.”

“Boyfriend and Pinky have consistently laid fertile eggs,” Richard said, “They’ll keep laying eggs if we move them, so by moving the eggs to other pairs, we have a better chance of hatching multiple live chicks.”

At least one other flamingo is currently sitting on an egg, and it’s possible that the flamingos could lay more eggs this season.

Although the sex of the chicks is currently unknown, the zoo will do DNA testing to determine the sex as soon as possible.

Baby flamingos are fed a reddish liquid called crop milk for about two months. In order to better drink crop milk, flamingo chicks are born without the distinctive “upside down” filter-feeding flamingo beak, which they develop as they age.

The zoo’s flamingos are part of an Association of Zoos and Aquariums Species Survival Plan.