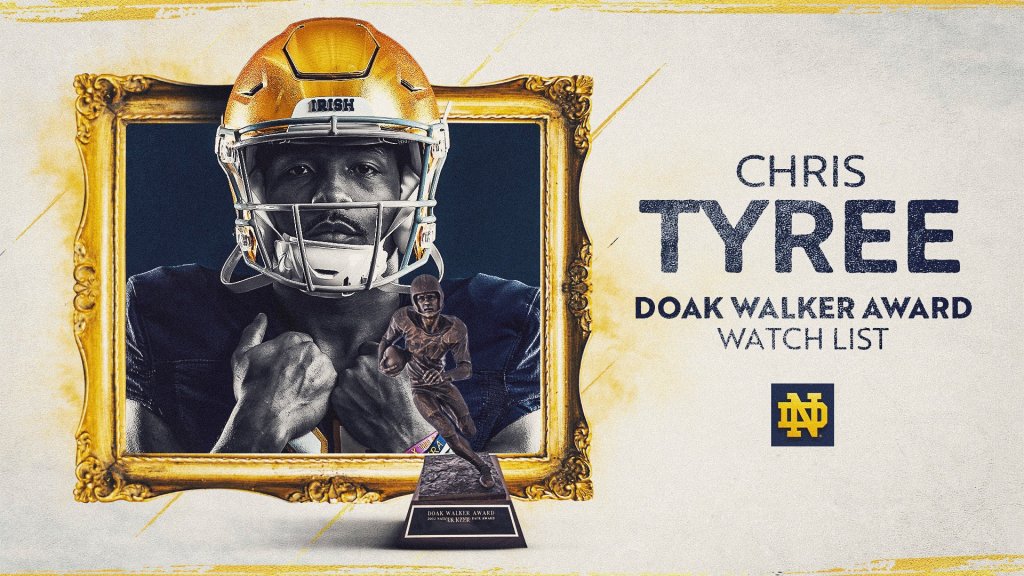 The Forum annually presents the award to the nation’s top college running back. Notre Dame junior Chris Tyree was among the student-athletes selected for the watch list.

• Dangerous with the ball out of the backfield or as a passing target, was fourth on the team with 827 all-purpose yards as a sophomore in 2021.

• Scored three touchdowns, one on special teams and two through the air.

• Finished the year with a career-best 115 receiving years and a touchdown against Oklahoma State in the Fiesta Bowl.

• Flipped the momentum in the Irish victory over Wisconsin in the Shamrock Series game at Soldier Field in 2021 with a 96-yard kickoff return for a touchdown — the first such return for the Irish since 2016.

University athletic departments nominate candidates for the award and can continue to do so through October.

The PwC SMU Athletic Forum Board of Directors will name ten semifinalists in November, and three finalists, as voted on by the Doak Walker Award National Selection Committee, will be announced in November. The committee will cast a second vote in December to determine the recipient.

The recipient of the 2022 Doak Walker Award will be announced live on The Home Depot College Football Awards. The award is named for SMU’s three-time All-America running back. It is the only major collegiate award that requires all candidates to be in good academic standing and on schedule to graduate within one year of other students of the same classification.