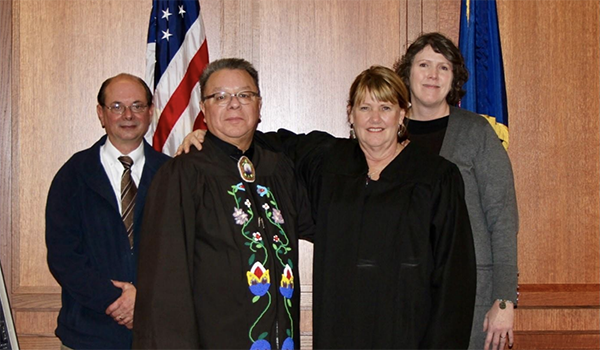 CASSOPOLIS — The Michigan Supreme Court reappointed Cass County’s Chief Judge, the Honorable Carol Montavon Bealor, to the Michigan Tribal State Federal Judicial Forum, along with 8 other judges, for a term commencing on July 1, 2022, and ending on July 1, 2025. Chief Judge Bealor was originally appointed to the forum by the Michigan Supreme Court effective March 9, 2022, for the balance of the term of her predecessor, Judge Susan L. Dobrich.

The Michigan Tribal State Federal Judicial Forum was formally established in 2014 by the Michigan Supreme Court. The group consists of tribal judges from each of Michigan’s 12 federally recognized tribes, 10 state court judges, and federal judges and officials. Michigan, which is home of 12 federally recognized Indian tribes and tribal court systems, has enjoyed a long history of collaboration between state and tribal courts.

The forum provides an ongoing venue for judges from all three jurisdictions to convene jointly to improve working relations and communication. The work of the forum is important to all Michigan citizens because it affects how court systems best serve Michiganders.

A key priority of the forum includes addressing child welfare issues and ensuring that court systems are meeting the needs of Indian children and families in ways that are culturally sensitive and appropriate. The first Tribal State Court Forum resulted in the creation of the “Enforcement of Tribal Judgments” court rule (MCR 2.615) and the passage of the Michigan Indian Family Preservation Act of 2013 (MIFPA).

According to Chief Judge Michael Petoskey of the Pokagon Band of Potawatomi Indians, “the most important recommendation of the [1992] forum was that the Michigan Supreme Court consider adopting a court rule that would provide for state court recognition and enforcement of tribal court judgments. In 1996, the Michigan Supreme Court adopted such a rule, ordering that state courts recognize subpoenas, warrants, and other judicial acts as long as that federally recognized tribe recognized the same orders from the Michigan courts. For many of us, that was a huge step…..”

The Cass County Courts have a long history of working collaboratively with the Tribal Court for the Pokagon Band of Potawatomi Indians since our citizens may have both state court and tribal court matters.

“The Tribal State Federal Judicial Forum is a wonderful opportunity for us to focus on not only recognizing tribal sovereignty while also finding the common ground in our justice systems learning from native justice tools such as talking circles and peacekeeping which have proven to be very effective since the outcome is driven not to ‘win’ or ‘lose’ but to preserve family and community relationships,” said Chief Judge Bealor.