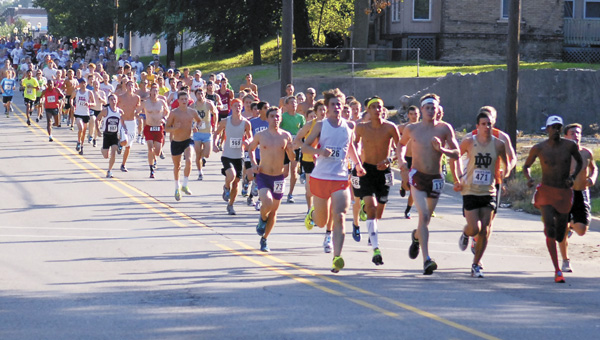 There is still time to register for Steve’s Run, which is July 15. (Leader file photo)

Schrock and race officials are excited to return downtown once again to start and finish Steve’s run.

After several years of having the race start and finish on the SMC campus, a decision was made to return it to downtown last October. The race was run at SMC in 2019 and forced to go virtual in 2020 due to COVID-19.

“We had to make some adjustments with race placement due to COVID, in 2019, we had it here on campus, and in 2020 we had to go virtual. In 2021, we had to put it in the fall. So, with lots of movement, we are excited to say we are on target to hit similar numbers that we did last October.”

Even better news for the Original Road and Trail Race, which was renamed “Steve’s Run” in memory of Steven Briegel, a Southwestern Michigan College honors graduate who lost his fight against cancer in 1990. All proceeds, including 100 percent of the pledge monies, are donated to SMC’s Steven Briegel Scholarship Fund and the Mayo Clinic Cancer Research Fund, is that sponsorships are up.

“The community has come out again and we are so excited to have the support of them, especially with it being downtown,” Schrock said. “A lot of great businesses, including Bud Distributing, who is going to be doing our beer tent this year, which is new to the race. They are going to be providing alcoholic and non-alcoholic beverages. We also have a lot of great Dowagiac community sponsors, such as presenting sponsor Fifth Third Bank, Baker’s Rhapsody, Imperial Furniture, #staydowagiac, Bakeman’s Barbers, McDonald’s, Family Fare, Enterprise Rent-a-Car, Ascension Borgess-Lee and Pepsi.”

The race, which traditionally has been run on a Saturday morning, has been moved to Friday, July 15, partly due to adding the beer tent. Food will also be available from Taqueria Del Rey of Dowagiac.

Runners who finish in the top three, both male and female, will receive medals in age divisions starting at 14 and under and running up through 70-plus.

Runners may register online at runsignup.com/Race/MI/Dowagiac/StevesRun.