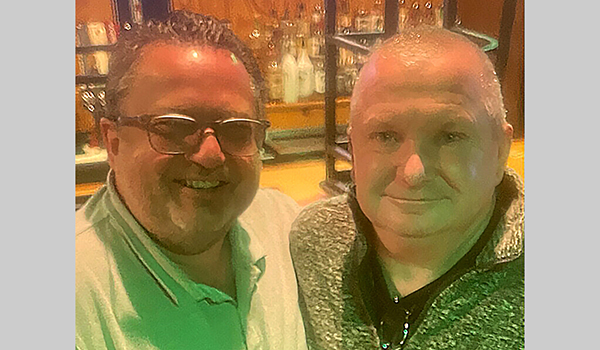 NILES — The statistics for those who have a heart attack outside of a hospital and live are pretty grim—only around 6 percent, according to the Institute of Medicine. Thankfully, Wings Etc. guest Dennis Kastner beat the odds when he went into sudden cardiac arrest on April 6 at Wings Etc. Niles.

In large part, his survival was thanks to off-duty nurse Brian Pears, who had been enjoying a burger after a long shift when he heard a commotion behind him. Kastner and Pears recently had the opportunity to meet while providing first-aid training to the Niles team.

“It was very weird going back in there,” said Kastner. “I got to meet Jeremy and Brian. I was grateful. Here’s a guy who doesn’t know me from Adam, and he went out of his way to preserve my life. All you can do is be grateful.”

On April 6, while enjoying his meal at Wings Etc. Niles, Kastner went into sudden cardiac arrest. Luckily, an experienced helper was nearby.

Brian Pears, a nurse of over 30 years, was on his way home – for the second time – that evening when he decided to stop into Wings Etc. for a burger – something totally out of character for him.

“I had just worked a 12-hour shift, left work, and stopped to eat at a drive-thru to get some food, but then I was called back into work,” said Pears. He returned to the hospital but learned he was no longer needed. On his way back to Niles, his takeout had grown cold, and he passed Wings Etc. He decided to turn around and get a warm meal.

“I turned around and went back to eat at Wings after a 14-hour day. I never do that,” said Pears. “There’s no worldly explanation why I was there. That’s out of my norm. I like to go home and cook my food after work.”

Pears sat at the bar, ordered a burger and a Diet Pepsi, and ate his food. He paid and was getting ready to leave when his server sat down another Diet Pepsi. Not wanting to waste the drink, Pears sat back down and enjoyed his soda. Soon after, he heard a commotion behind him. Pears turned to look and saw a man lying under a table. He quickly moved into action.

Pears provided hands-only CPR for around 10 minutes until medics arrived and attached a life pack to Kastner, shocking him twice with the defibrillator and reviving him.

After being transported to the hospital, Kastner underwent surgery to have three stents inserted. While he came away with several broken ribs, Kastner is expected to make a full recovery and has no permanent heart damage.

“It was very emotional for me,” said Bayles of the experience. “I feel a responsibility for my guests to make sure they all enjoy their time here and make sure they go home safely. So, to see a man lying there… it was difficult.”

That night, Bayles began to wonder what he and his restaurant could have done differently.

One thing Pears had asked Bayles and a State Trooper who arrived on scene was if they had an automated external defibrillator, which would have helped revive Kastner sooner.

“I contacted Jeremy a day or two later and told him it would be a good idea if he got an AED,” said Pears. “But Jeremy was already working on it before I even said anything.”

While Pears noted that Bayles might never need to use an AED again, they are handy to have in the store and are relatively cost-friendly.

Bayles also wanted to ensure that should such an event ever happen in his store again, his staff would be comfortable taking life-saving measures. So, he invited Pears and EMS coordinator Kerry Hershberger to Wings Etc. Niles to teach the team hands-only CPR.

“I wanted to get my staff trained, so they are better prepared,” said Bayles, who noted that the location closed early on May 17, and the staff was trained in hands-only CPR, the Heimlich maneuver and basic first aid for cuts and burns. “We were lucky this time to have Brian, a nurse, with us, but we may not be so lucky to have a trained professional next time.”

Pears was also able to meet Kastner, who, as it turned out, is a first responder himself. Kastner is the Captain of the Galien Township Fire Department and has been a firefighter for more than 32 years. He, Pears, and Bayles stressed the importance of learning hands-only CPR.

“Something like this could happen at any time, any place, and if people are trained in CPR, maybe they can help,” said Kastner.

That’s exactly what Bayles hopes training his staff will do, should the need ever arise again. He said he plans to invite Pears back again to train team members who couldn’t attend the first training and said he’d like to do periodic training to keep his team refreshed.

“Hands-only CPR is so easy, and I highly encourage anybody to research it online, watch videos on how to do it and not be the least bit afraid to perform hands-only CPR,” said Bayles. “Even if you do it wrong, something is better than nothing, and there is a good chance that you’ll at least be able to keep the blood flow going to the brain long enough for first responders to take over.”

As to what put Pears at Wings Etc. on April 6, when he would typically go home after a long shift, Pears only had one explanation: “I believe God puts people where they are supposed to be. There is no other explanation as to why I was there. I would never, ever do that when I’m on call.” 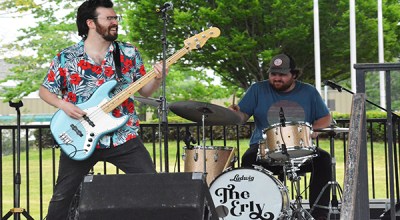