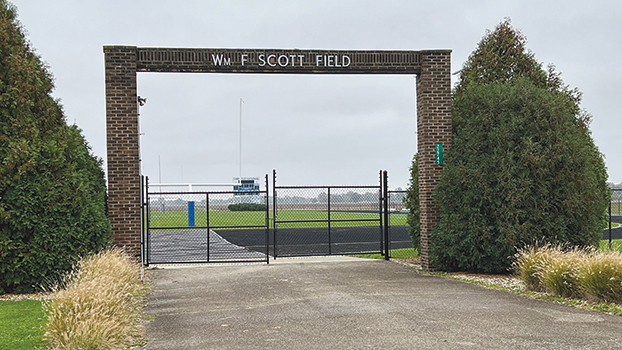 William F. Scott Field in Cassopolis was named after the late educator and principal who died at a young age. (Leader photo/SCOTT NOVAK)

CASSOPOLIS — Ever wonder how the local football fields got their names? The reasons are varied as the individuals or businesses they are named after.

In Cassopolis, William F. Scott Field was named after an educator, who also coached and later would before principal before dying at a young age.

He would leave the community to teach at Oliver School and John Adams High School in South Bend, Indiana. He also held two terms as the president of the National Education Association — South Bend, until he stepped down in the spring of 1972.

Scott taught and coached at Oliver School for four years before moving to John Adams, where he was a mathematics teacher and its freshman basketball coach. Scott also coached football and wrestling at Cassopolis, along with basketball.

According to son Reggie Scott, Cassopolis offered his father the principal position in 1973.

“He was a disciplinarian, and he was fair,” Scott said of his father. “He was very well respected, and he had a great deal of integrity and pride. When we moved to Cassopolis, no African American had lived on Diamond Lake. My dad said that if they wanted him to be the principal here in Cass, he wanted to live on Diamond Lake and break that barrier.”

According to Scott, Cassopolis was dealing with many racial problems in the high school at the time. In part, the elder Scott was brought in to help change that situation because they knew he was a good teacher and coach when he worked in the district the first time.

“They felt like he would be the man who could help turn things around,” Reggie Scott said.

The Yazoo City, Mississippi, native who earned a bachelor’s degree at Alcorn College before doing his graduate work at Western Michigan University and Michigan State University, returned to Cassopolis to become the high school principal in 1972.

“He did one year after we came here,” Reggie Scott said. “It was my sophomore year.”

The family was elated to discover that Cassopolis was going to honor William F. Scott by naming the football field after him in the late 1970s.

Among the people who were instrumental in getting his father’s name on the arch was the late Dan Lee and George Hawthorne.

“Since they named the high school after Ross Beatty, they wanted to have the football field named after my dad,” Reggie Scott said. “My dad was very instrumental in getting the new high school built.”

Reggie Scott said that every time he goes by the school and the field he thinks of his father.

“I think about him all the time,” he said.

In summing up his legacy, Reggie Scott called his father a trailblazer.

“He definitely believed in Civil Rights,” he said. “He was fair, but demanding.

In Dowagiac, the football field has a pair of names attached to the arch that welcomes fans on Friday nights.

Originally, the newly purchased property two blocks down from the new junior-senior high school building, which was known as Central Middle School, was Alumni Field.

It was named for the alumni who helped raise the money to build the entrance to the new athletic field, which sat on the “Dixie Highway,” which is now M-51. Classes from 1919, 1925 and 1926 donated money to the project, which cost approximately $4,000 to build.

The field itself was a gift from the High School Alumni Association.

In September of 1983, the name Chris Taylor was added.

Taylor is perhaps the most famous athlete to come out of Dowagiac. Taylor, known as the “Gentle Giant,” is known throughout the world for his wrestling, and he also played football for the Chieftains.

But it was wrestling that made Taylor a household name, starting with his high school days. He would go on to star at Muskegon Community College and then Iowa State University. He the Michigan state champion in 1967, losing just one match the entire season. He was an NJCAA National Champion at Muskegon before transferring to Iowa State, where he won the NCAA Championship in 1972 and 1973. He pinned his way to the title in 1973.

Following the 1972 championship season, Taylor made the United States Olympic team, where he wrestled in both freestyle and Greco-Roman. After a controversial 3-2 loss to the Soviet Union’s Alexander Medved, he earned the bronze medal in freestyle. A poster of Medved throwing Taylor at the Olympic Games held in Munich, Germany, can still be purchased.

After college, Taylor tried his hand at professional wrestling. He would die shortly after his 29th birthday due to health complications.

Taylor was inducted into the National Wrestling Hall of Fame and Museum in Stillwater, Oklahoma.

When you talk about a community coming together to create something good, Marvin L. Selge Sr. Field in Brandywine is a perfect example.

For more than a decade, the Bobcat football, soccer and track teams were limited by their facilities. That all changed when the district built a state-of-the-art soccer, track and football facility for a fraction of the price of traditional construction.

That is because Brandywine School Board President Jim Curran and dedicated parent Tom Balint joined forces to get the Bobcats on a level playing field with its competition.

It took nearly a decade to get the project completed, but the end result speaks for itself.

Known as the “Backyard Boyz,” a collection of students that donated hours of free labor, Curran, and Balint were also able to get area businesses to chip in make their vision become a reality.

There were also fundraisers like the Cat Tracks 5K annual run that helped raise money to complete the project.

But perhaps the biggest donation came from Selge Construction, which under the direction of Marv Selge Jr. cleared the land, and donated the equipment needed to complete the project.

Since the company donated the cost of the equipment, along with helping to clear the land for the fields and the track, it was decided by the Brandywine School Board that the field would be named after Marv Selge Jr.

Buchanan named its football field to honor those who had died fighting in World War II.

According to Ruth Writer, there were 12 young men who were supposed to graduate in 1946, but did not because they served in the war.

It replaced the original athletic was across from the current site where McCoy Creek Recreation Area now locates the dog park.

The field was built using the natural hillside in the spring of 1946, which makes it 75 years old. In 2010-11, a new press box and concession stand were built. New bleachers were eventually added, which Writer believes were put in over the top of the original wood bleachers.

The new press box and the concession stand were dedicated the first game that followed Sept. 11, 2011.