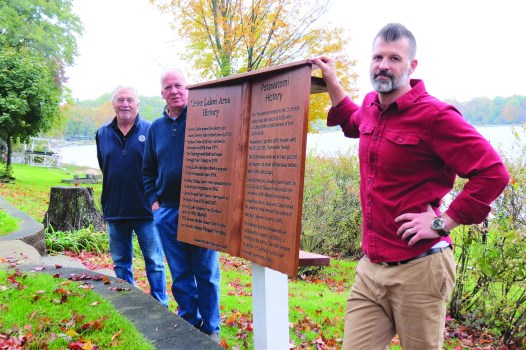 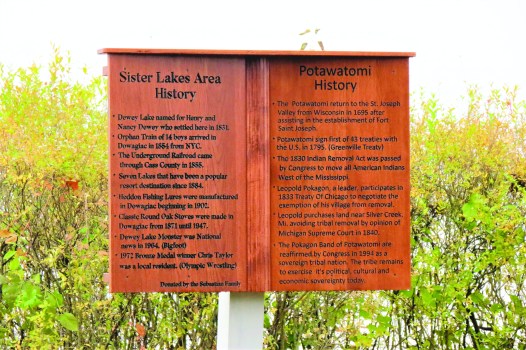 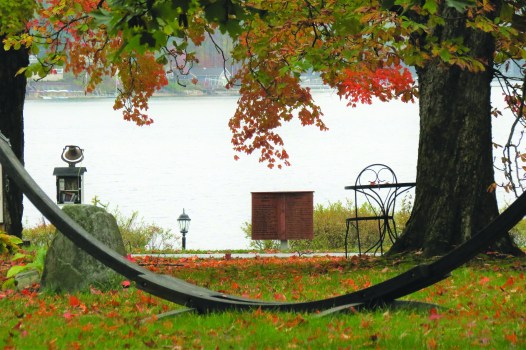 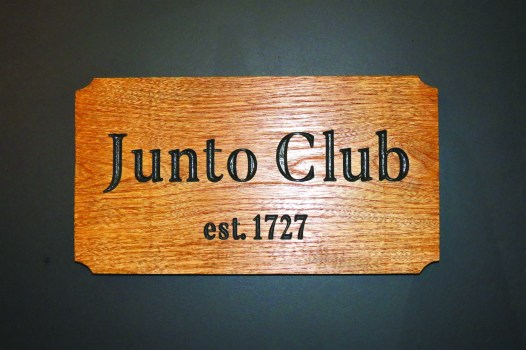 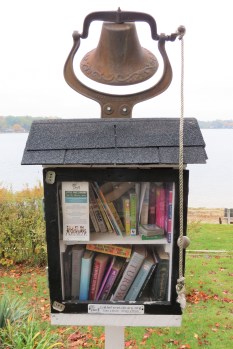 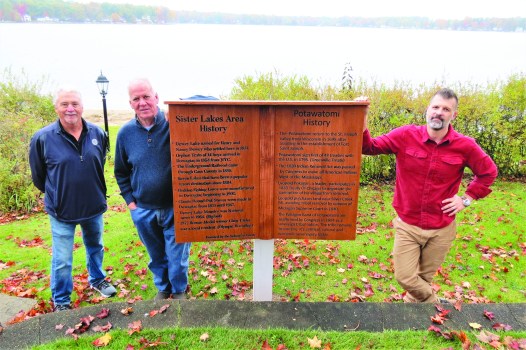 DEWEY LAKE — The Little Free Library and historical sign on Dewey Lake are more than just landmarks intersecting the past, present and future of the Dowagiac area. They are also part of the figurative spine that helps bind together the pages of the Sebastian family book.

Through his love of history and increased affection for the Sister Lakes area, Chicago resident Justin Sebastian teamed up with two local woodworkers to preserve a slice of area history and enhance his family’s connection to their part-time home on Dewey Lake.

When the COVID-19 pandemic struck in 2020, Chicago resident Justin Sebastian was forced to work from home. He describes his job, which involves using computers to make high-intensity stock market trades, as an extremely competitive and stressful environment where he is stuck in an office without leaving all day.

Rather than stay in Chicago to endure this, Sebastian and his family decided to relocate to their part-time residence in Silver Creek Township, on Dewey Lake.

“Dowagiac and our home could not be more opposite,” he said, “which is exactly what we were looking for and needed.”

The home – which features 133 feet of sandy lakefront across Garrett Road and a converted barn recreation lounge called the “Junto” – is named Ashland’s Run, after a stray dog that became family to Sebastian after he found him on Ashland Avenue in Chicago.  Ashland lived more than 16 years before he died in 2016.

“A ‘run’ when defined as a noun related to animals is a place where they can run freely,” said Sebastian, who bought the house in 2018. “I like to think of Ashland’s Run as a place where my family and I can be free from our normal hectic life.”

The home also sits on a plot of land once owned by Henry Dewey, who is considered to be one of the original non-native settlers of the Dowagiac area.

Sebastian has documents dating the property back to 1835, when the U.S. government sold the land to Amos Dow, who later sold the property to a Jonathan “Duey” on May 13, 1836. On the same day, Jonathan Duey transferred the deed to Henry Duey, whose name was changed to the proper “Dewey” on later deed transfer documents. Jonathan was Henry’s son, according to 1882’s “The History of Cass County.”

As a self-proclaimed American history buff, Sebastian was thrilled by these facts and instinctively wanted to learn more about his property and of the surrounding area.

“I was brought up in a house of science where knowledge was prized above all else,” he said. “Knowledge and understanding of our and other history allow us to learn from others’ mistakes and successes as well as understand multiple viewpoints and cultures.”

While working from Ashland’s Run in 2020, Sebastian and his wife, Nicole – a librarian before becoming a full-time mom – decided to bring a little slice of their home neighborhood to Ashland’s Run by installing a Little Free Library – a neighborhood book exchange that is part of a nonprofit organization pf the same name’s network of public bookcases. More than 90,000 public book exchanges are registered with the organization.

Because of the uncertainty of COVID transmission at the time, the Sebastian’s library was initially used for a daily trivia question, placed in the window of the library by the family. Before too long, community members started putting books in, and it gradually became a part of the Sister Lakes community.

From there, Sebastian wondered what else he could do to engage passers-by. Initially, he wanted to install a statue or telescope, but ultimately decided to erect a sign featuring facts about the area’s history, with the help from a local woodworking duo and the Pokagon Band of Potawatomi.

Tom Holt and Dan Ely, who co-own Beaver Gang Woodcrafters, are both 1970s graduates of Dowagiac High School. They had already helped Sebastian create a sign for his Junto room a tribute to Benjamin Franklin’s 1770s club for the improvement of its members and their community.

“It was all about bringing the community together,” Sebastian said of the Junto, adding this is what he hoped the library and historical sign could be.

When Sebastian told the Beaver Gang about his idea for a sign and expressed interest in the Potawatomi, Holt mentioned he was close with Judy Winchester, who was a schoolmate of his and is now the chair of the Pokagon Elders Council.

“It was so exciting,” Sebastian said. “It’s not even just learning about the Pokagon Tribe of Potawatomi, but everything about how they exist in the community here.”

Winchester put Holt in touch with Tribal Historic Preservation Officer Matthew Bussler, who assisted the Beaver Gang and Sebastian with providing facts about the tribe for one side of the sign.

“We never had the thought of doing it ourselves,” Ely said of including Pokagon facts. “We knew immediately we needed to go through the tribe and have them present to us what they would like to see on the sign.”

The finished sign reads as two pages of a book – the left side with facts about the Dewey Lake and Dowagiac area, and the right side complete with Pokagon facts approved by the tribe. The sides are bound together with a thick binding to signify the close ties between the Pokagon Band and Dowagiac, as well as tie into the theme of the neighboring library.

“It’s insane once you start hearing the details of just how this country shouldn’t have made it, and it did, largely dependent on Native Americans,” Sebastian said, his face lit with excitement as he recalled stories of Lewis and Clark and Sacagawea, as well as Daniel Boone’s involvement in the Civil War. “Thinking back on American history and native Americans and the way they were treated, I think all the recognition that we can provide, we should. And they really are a part of the community here, which is so awesome. I just continue learning little by little.”

As Sebastian learned about the Pokagon Band through this project, he used his passion and the opportunity to educate his children, 5 and 8 years old, on the tribe.

“We were out one day and saw a tribal police car, and I stopped to show the kids to try to explain to them what that is,” Sebastian said. “Most kids, especially kids in the city, they would have no idea something like that exists. They don’t understand that they have their own sovereign police department, their own sovereign land.”

Sebastian’s enthusiasm for American history, combined with his wife’s work as a librarian, these two Dewey Lake projects are a serendipitous combination of passions they can impart on their children at Ashland’s Run.

“This place is designed not just for my kids, but for kids in general,” Sebastian said. “It’s a fun place to come and enjoy and learn. We live in the city, so it’s nice to get to learn about things here. Both of my kids love to read, too.”

Sebastian said now he’s even been learning some things from his daughter. She likes to read Ranger Rick and Highlights for Children, and taught him that spreading olive oil on a carved pumpkin will help it keep from dehydrating and last a few more weeks around Halloween time.

“That was in one of those magazines she was reading,” Sebastian said. “These little things that you learn, it really kind of comes full circle like that.”

Regarding the historical sign and the legacy he wants it to leave, Sebastian said he just wants to help spread knowledge.

“Dowagiac is my literal happy place – I pull off at Exit 30 and my blood pressure just drops,” he said. “The whole property will be my legacy when I’m gone for my children and their children, but it’s really about preserving the history of the Pokagon and Dowagiac.”