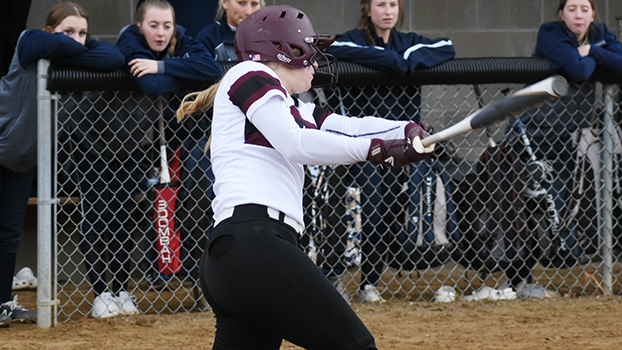 Hailee Kara, seen here against Niles, had two of Buchanan’s three hits in its 1-0 loss to Parchment in the Division 3 Regional semifinals Saturday. (Leader file photo)

PARCHMENT — Scoring runs has not been a problem for the No. 6-ranked Buchanan softball team this season.

Unfortunately, the Bucks could not connect Saturday afternoon in the Division 3 Regional semifinals against host Parchment. The result was a 1-0 loss to the Panthers that ended Buchanan’s season and dreams of a repeat trip to the state semifinals.

Panther pitcher Jess Dreier tossed a three-hitter against the Bucks, which included seven strikeouts and just one walk.

“We just didn’t really hit the ball,” said Buchanan Coach Rachel Carlson. “She really kept us off balance. I think my top three hitters were 0-for-7. We had runners in scoring position, and we just didn’t get the hits. Last weekend we left a lot of runners on and we worked on it all week.”

Buchanan’s Hailee Kara was equally impressive in the circle as she allowed five hits while striking out six and not walking a batter.

Two of those five hits led to the game’s only run in the top-half of the sixth inning.

With one out, Kara hit Jess Brady, who would come around to score the game-winning following hits by Kaylee McKinney and Dreier.

“Hailee pitched great, and we played great ‘D’ [defense],” Carlson said. “We just didn’t get the hits when we needed to. That happens this time of year.”

The Bucks (32-7) had a chance to tie or take the lead in the bottom of the seventh as they got two runners aboard on a single by Kara and an error. Dreier induced a fielder’s choice ground ball for the second out of the inning and then struck out Cameron Carlson on three pitches.

Buchanan also had a chance to score in the third inning as Carlson doubled, the game’s only extra base hit, and moved to third on a groundout. Camille Lozmack’s bunt attempt went straight to Dreier, who tossed it home to get Carlson out.

Despite the loss, it has been a great two-year run for the Bucks, who reached the Division 3 state semifinals at Michigan State University in 2021. Buchanan lost 2-1 to Richmond.

“Just like I said, I thought we were well prepared for today,” Carlson said.