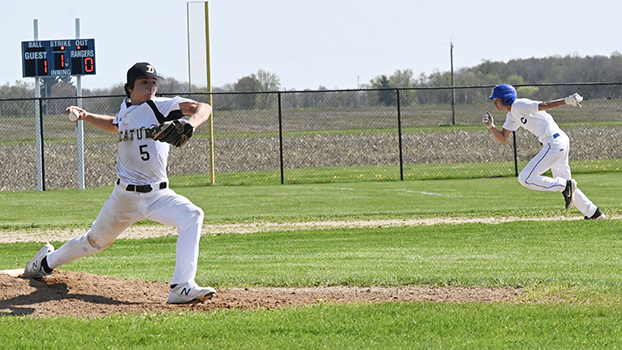 Decatur, seen playing Cassopolis earlier this year, eliminated the Rangers for the state tournament Saturday with a 15-0 win in the Division 4 District semifinals. (Leader file photo)

EDWARDSBURG — An unexpected champion came out of the Division 2 Baseball District at Edwardsburg Saturday.

Berrien Springs, which entered Saturday with a 15-12 overall record, knocked off Dowagiac in the semifinals and then upset four-time defending district champion Lakeshore 5-2 in the title game.

The win advances the Shamrocks to the regional semifinal against Vicksburg. The game will also be played at Edwardsburg starting at 4:30 p.m. The winner moves on to the regional championship at Hope College Saturday.

Berrien Springs scored all the runs it would need in the third inning when it pushed a pair across the plate against Dowagiac pitcher Mason Maggert.

The Shamrocks (17-12) added an insurance run in the fourth. The Chieftains scored their lone run in the sixth inning.

Adam Johnson picked up the victory for Berrien Springs, with relief help from Erik Belin, who worked the seventh inning.

The Shamrocks had five hits, including a double by Brody Brewer. The Chieftains finished with four hits.

After Lakeshore had routed host Edwardsburg 11-6 in the other semifinal, the Shamrocks turned to ace Garrett Brewer, who worked five and a third innings, allowing two hits and striking out seventh.

Tyler Ewalt pitched the final inning and two-thirds, giving up just one hit.

After jumping out to a 1-0 lead on a second-inning RBI single by Louie Perkins, Berrien Springs extended its lead to 4-1 with three runs in the fourth inning, highlighted by Charlie Ewalt’s two-out single.

The district championship was the Shamrocks’ first since winning back-to-back titles in 2013 and 2014.

A five-run third and a six-run seventh inning accounted for a majority of the Raiders’ runs.

Landon Rose tossed a two-hitter for Decatur, which advances to the regional semifinals Wednesday, which the Raiders are hosting at 4:30 p.m. Decatur faces Colon. The winner advance to the regional finals at Kalamazoo College Saturday.

The Raiders finished with 11 hits, including a double and a triple by Gavin Boodt, as well as, doubles by Andrew Confer and Landon Fisher.