‘You might just save a life:’ Army veteran, county leader shares traumas of war 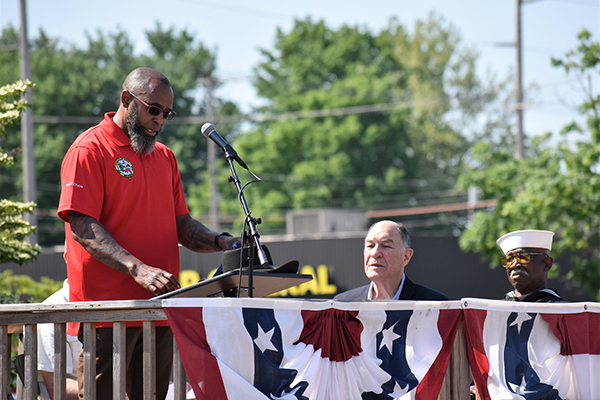 DOWAGIAC — With a crowd lining the streets of downtown Dowagiac, a local veteran delivered a Memorial Day message: If a veteran opens up to you, listen to their story – you might just save their life.

Cass County Commissioner and Army veteran Jeremiah Jones fought back emotions Monday as he spoke to parade-goers about his war experiences in Desert Storm, Iraq and Afghanistan, as well as the post-war struggles of veterans.

“It’s very hard for us to talk about the things we’ve seen, the things we’ve done and the people that we’ve lost,” Jones said. “There’s countless people who have given their lives for our freedom, and we’re still losing them every day here at home.”

Thirteen years ago, Jones nearly died in the line of duty, and shared his story with the crowd.

“[Memorial Day] was almost for me,” said Jones, about one particular incident in Iraq. “I was a convoy commander escorting 80 vehicles from Tikrit to Mosul, and we got cut off by somebody in a vehicle that was up to no good.”

Jones said as his convoy was preparing to capture the suspect in the vehicle, he saw a rock that was “too clean to be where it was,” and advised his driver to avoid the rock. Jones explained to the crowd that everything in these war zones is a potential explosive, and must be approached with caution.

“The next thing you know, it was just like the movies – everything went in slow motion,” said Jones, making the sound of an explosion. “Out of nowhere, I seen the light. It was my driver getting blown out of the vehicle. … I was like ‘please, God, don’t let me die like this. And if you do, don’t let it hurt.’ … the next thing I know, I see the ground coming up quickly, and its lights out.”

When Jones woke up, he said the vehicle was split in half by three anti-tank mines. The driver broke his leg, the gunner broke his ribs and Jones had a traumatic brain injury. A week later, during the follow-on mission after this incident, one of Jones’ platoon members died.

“I’ve had survivor’s guilt for 13 years, and it’s hard,” said Jones, choking back tears. “When a veteran wants to talk to you, sit down and let them open up to you, because you may just save a life. … If I didn’t get [my story] out, I’m telling you right now, I wouldn’t be here. By the grace of God, I’m here now. So, reach out to your veterans so that we don’t lose any more.”