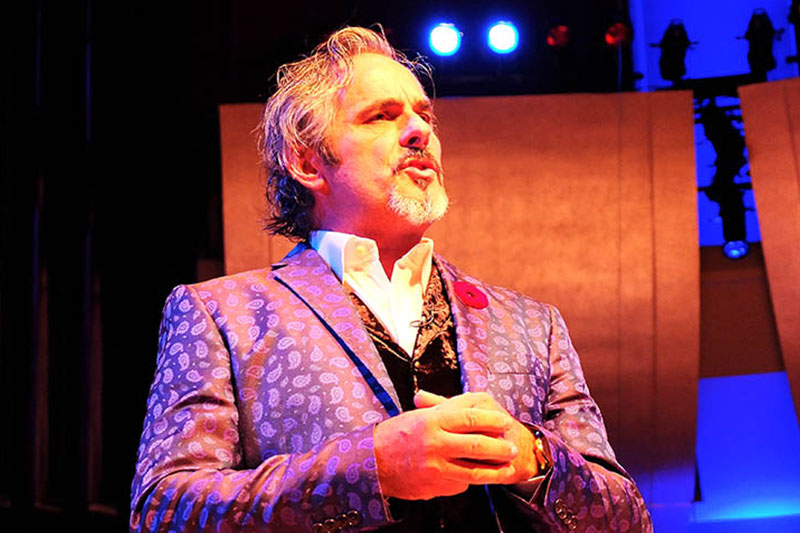 While Harbor Shores in Benton Harbor is hosting the 2022 Sr. PGA Championship, the Silver Creek Events Center at the Four Winds Casino in New Buffalo is hosting NBC Sports and Golf Channel writer and broadcaster David Feherity and his “Feherty Off Tour — Wandering Around On His Own” show Friday night.

Feherty, who was born in Bangor, County Down, Northern Ireland, is a former professional golfer who won events on both the European Tour and the PGA Tour in the United States.

He is also a former member of the European Ryder Cup Team.

When his playing days ended in 1997, Feherty began a career as an on-course reporter and golf analyst. He contributes to Golf Magazine with his column called “Sidespin.” He is also the author of four books, which have landed him on both the New York Times and Booksense best-seller lists. In 2011, the Golf Channel premiered his only weekly show called Feherty, which provided him the format to share golf stories and interview not only golfers, but former presidents and athletes from other sports. That show was canceled in 2021 after 10 years and 160 guests.

In 2014, Feherty decided to take his act on the road. It provides golf fans with a look behind the curtain, as well as a chance to pick his brain about a variety of topics.

Feherty said that taking the show on the road without the constraints of television rules makes it even more lively than it was on the Golf Channel.

“There is even less you can do on TV these days,” he said. “You have to be careful, especially comedians. You are likely to get punched.”

Feherity Off Tour is a journey through his life.

“I have been a professional golfer for 47 years and traveled around the world,” he said. “I have collected stories along the way. But basically, half of the show is Irish humor with a few fart jokes thrown in. It is a walk through my like from my childhood until the present day. It is a collection about other people as well. Like Ken Venturi or Arnold Palmer or John Daly. People that I have met along the way.”

Feherty said some of the stories are pretty colorful.

“How can they not be when you are talking about someone like John Daly?” he said. “Have you seen him on the golf course today [first round of last week’s PGA Championships], he looks like Santa Claus.”

At the end of the show, he takes questions from the audience. What is the question he is asked the most?

“It always reminds me of stuff when someone in the audience asks me a question and it reminds me of something I haven’t done during the show. The No. 1 question I get is ‘who was my favorite guest on the show.’ It is a really difficult to answer because I interviewed 160 people, four presidents and people like Samuel L. Jackson, Matthew Mcconaughey and Condoleezza Rice. She is one that stands out to me. She was just amazing. Bill Russell, you know, perhaps the greatest winner in all of professional sports, and of course Tom Watson, who has been like a big brother to me.”

Another question he gets nearly every night is who is the greatest golfer of all time?

Feherty says golf is in great hands these days as another generation steps forward to replace the greats who have reached or are nearly the end of their careers.

“If you look at that lead group who is about to tee off [at the PGA Championship] — Rory McIlroy, Jordan Spieth and Tiger Woods — that is a perfect cross-section of the top of the game. With Tiger, you wouldn’t be surprised if he got into contention. Rory and Jordan are two of the nicest kids you will ever meet and are phenomenal players. But the strength and depth is just incredible. It is just so hard to win a regular tournament, let alone a major. Athletes are getting better and better in every sport.”

A limited number of tickets remain for Friday night’s show, which begins at 8:30 p.m. To reserve a seat, go to fourwindscasino.com/newbuffalo/entertainment/event-center.