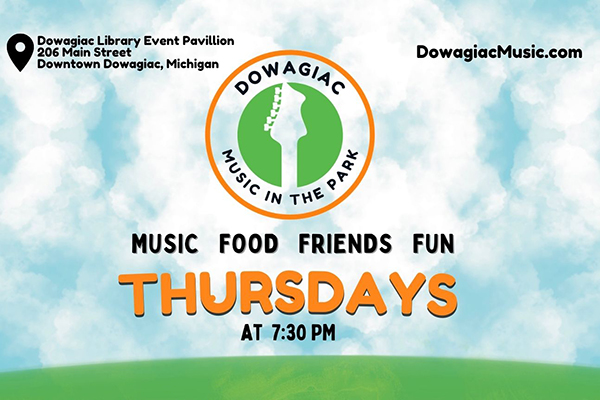 DOWAGIAC — “It doesn’t matter what you wear, as long as you are there … there will be laughing, singing, and music swinging.”

While folks may not literally be “Dancing in the Streets,” as Motown group Martha and the Vandellas sang nearly 60 years ago, Dowagiac residents and visitors are sure to be bopping along as summer concerts return for a new season.

Dowagiac’s Music in the Park summer concert series announced its initial lineup this week with a mix of familiar artists, as well as six new bands. A wide variety of music will be presented, from the tried-and-true SMC Brass Band to Latin rockers Cabildo and outlaw country band Hodie Snitch.

Performances this summer will be hosted at the Dowagiac Library Event Pavilion on the corner of New York Avenue and Main Street at 7:30 p.m. every Thursday from June through August.

Last week, the concert series announced its return with a new location, food vendors and an updated musical direction from a new event coordinator. For Dowagiac Mayor Don Lyons, the new-look concert series represents a wave of growth and expansion for the city.

“Lately, there’s been a feeling in downtown Dowagiac that I can only describe as electric,” Lyons said. “In the past year, we’ve seen new businesses open, existing businesses grow, and there’s much more in the works. This year’s Music in the Park series … is furthering Dowagiac’s appeal as a destination. I look forward to seeing a wide variety of visitors from Dowagiac and beyond on Thursday nights this summer.”

Confirmed vendors so far include OAK + ASH BBQ, Nola Roux, Sammy Arepas, The Baker’s Rhapsody, Dowagiac Fire Department Grillmasters and Wood Stock & Grill. As has been tradition, the series will kick off with a performance by the Southwestern Michigan College Brass Band on June 2.

Ongoing updates, as well as specific vendor dates can be found at DowagiacMusic.com. Vendors and sponsors interested in participating can reach out to event organizer Zena Burns at zb@zenaburns.com.