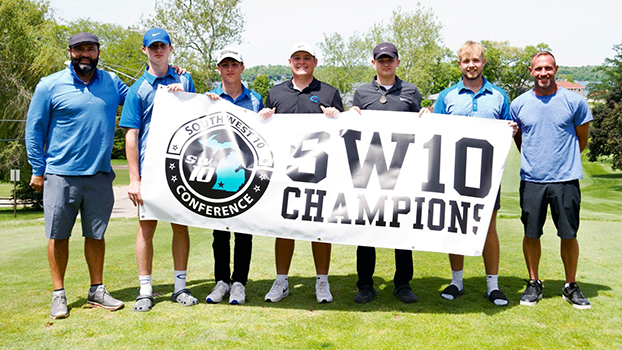 Led by a trio of first-team all-conference performers, including Southwest 10 Conference Most Valuable Player Brayden Westrate, Cassopolis shot 346 as a team to easily win the title.

Comstock finished a distant second with a score of 418, while host White Pigeon shot 425, Marcellus 507 and Centreville 526.

“It was a nice accomplishment for the team,” said Cassopolis Coach Joseph Westrate. “We did not lose a conference match all year even though we competed without some of our top guys at times due to other sports [the trials of being a small school and sharing players]. I am very proud of the growth and development of each player on the team. All have worked hard and I feel like our best golf is most definitely ahead of us.

“Senior leadership has been important, especially from Kendon Williams who is co-captain. Kendon’s game and how he manages the golf course has come so far in the past year. And, his work ethic to get better every day has rubbed off on the rest.”

Westrate was the medalist as he finished with a round of 82. Cassopolis also got a pair of 87s from Williams and Logan Pflug, a 90 from R.J. Drews and a 101 from Kenny May.

The first team was rounded out by Comstock’s Matt Searles and White Pigeon’s Luke Gropp.