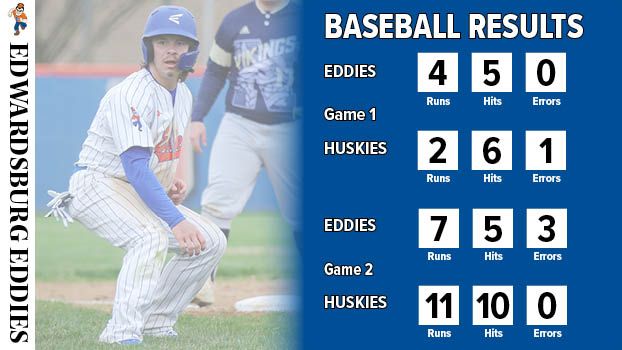 The No. 6-ranked Eddies won the opening game 4-2, but dropped the nightcap to the Huskies 11-7. The split left Edwardsburg with a 21-4 overall record.

In the first game, A three-run first inning was all the Eddies needed to knock off Portage Northern.

A.J. Obren picked up the mound victory with relief help from Connor Ostrander, who came on in the sixth inning for earn the save.

In the nightcap, Portage Northern jumped out to a 5-0 lead, before the Eddies scored four runs in the fifth inning to make it a close game. The Huskies added two in the bottom of the fifth and then scored four more in the sixth to seal the victory.

On Friday, the Eddies split a pair of Wolverine Conference games with host Paw Paw.

The Red Wolves won the opening game 7-5 before the Eddies rebounded to win the nightcap 12-4.

In the opening, Paw Paw scored four runs in the first inning and led 6-0 before Edwardsburg came back to cut the lead to 6-5 in the third inning. The Red Wolves tacked on an insurance run in the bottom of the fourth to complete the scoring.

Szlanfucht had a pair of hits for the Eddies, while Obren doubled and Ostrander tripled.

In the second game, Caeden Pulling scattered five hits and Edwardsburg banged out 11 hits to earn the split.

Mikel had three hits, including a home run, and drove in five runs for the Eddies, who also got three hits from Layman and a pair of RBIs. Bookwalter singled and doubled.