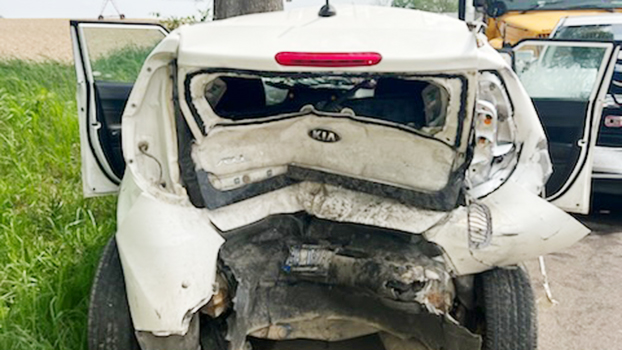 Cass County Sheriff Richard J. Behnke reported his office investigated an injury crash involving five vehicles Friday, May 20 at approximately 3:14 p.m. The crash occurred on M-40 Hwy, south of Brody Road in Marcellus Township. One driver was hospitalized for non-life threatening injuries. No student on either school bus sustained injuries during the crash.

Initial investigation shows Keisha Sylvester, 31, of Kalamazoo, was traveling south on M-40 and attempting to turn east onto Brody Street, when Dean Miller, 58, of Mendon, was headed northbound and failed to stop, colliding with Sylvester. Sylvester’s vehicle then traveled into the northbound lane of M-40, and collided with the side of a Marcellus School bus, driven by Loretta Ransbottom, 66, of Marcellus. Sylvester’s vehicle continued traveling south in the northbound lane of M-40 and caused a head on collision with the vehicle of Julie Hicks, 60, of Marcellus. A Marcellus School Bus, driven by Sarah Beurmann, 40, of Marcellus, was unable to stop and also collided with Hicks’ vehicle.

Sylvester was entrapped in her vehicle and had to be extricated by Marcellus Fire Department. Pride Care Ambulance transported Sylvester to Bronson Kalamazoo, for non-life threatening injuries. All drivers were wearing seatbelts on and airbags deployed in three vehicles.  At this time, deputies do not believe alcohol or drugs were factors in the crash. The crash remains under investigation.