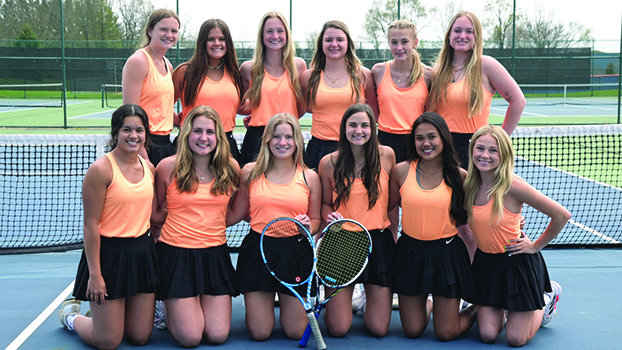 THREE RIVERS — For the fifth straight time, the Edwardsburg girls tennis team has advanced to the Division 3 state finals.

Edwardsburg won half of the championship flights on Thursday.

In singles play, the Eddies’ No. 1, No. 2 and No. 3 players — Leah Hosan, Claire Deak and Eucris Ugay — captured titles. In doubles, the No. 1 doubles team of Channing Green and Mackenzie Schaible won the championship.

Edwardsburg also reached the finals in two of the four matches they did not win.

Katie Schaible and Ella Castelucci lost in the finals at No. 3 doubles to Parma Western’s Teagan Robertson and Alena Engle, while at No. 4 doubles, the Eddies’ Mackenzie Vargo and Zoe Wimberley lost to Parma Western’s Gabi Davis and Dru Porter.

Hosang cruised to the victory at No. 1 singles, defeating Parma Western’s Faith Holton 6-0 and 6-0 in the title match to improve to 18-2 on the season.

Green and Schaible (13-4) had to battle tooth and nail to win their championship.

The Edwardsburg duo needed three sets in the quarterfinals and then defeated No. 2-seeded Sydney Schiele and Cadence Knight, of Niles, 6-4 and 7-5.

The Eddies, who had qualified for the state finals every year since 2016, except 2020, when the tournament was canceled due to COVID-19, will travel to Midland to play for a state championship June 3-4.