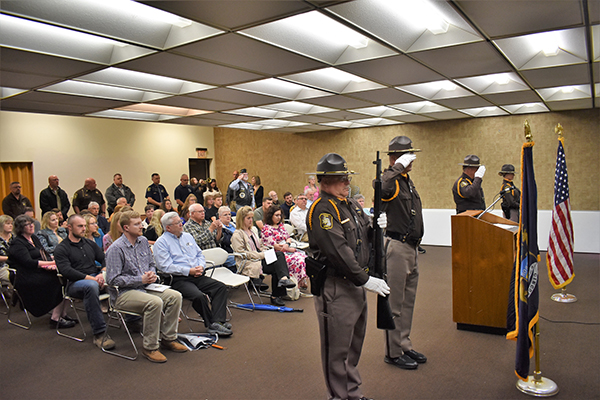 CASSOPOLIS — Nearly 22 years ago, Cass County Deputy Shane Britton died while responding to a call for assistance. To this day, he remains the only Cass County officer to die in the line of duty, and the county continues to honor his memory every year for National Police Week.

The Cass County Sheriff’s Department hosted its annual Shane Britton Memorial Service Wednesday at the Cass District Library, 319 M-62, Cassopolis. The ceremony not only honored the memory of Britton, but all officers – especially those who have died in the line of duty.

“They served, they gave, they loved people,” said Sumnerville Baptist Church Pastor Dan Greegor, during the memorial. “To have an intent that is more than just daily living – obviously Shane had that because it’s still affecting people.”

Greegor went on to encourage people attending the ceremony to ask themselves how they will be remembered.

“Will I choose to serve not simply because I’m trying to build memories, or because I know that it will build memories?” Greegor said. “I need to do it with intent. … The challenge is to us now. We’re still here. We still have an opportunity that we would use it wisely, for good.”

“May times never erase the sacrifices that are made / May no officers ever fall alone to lie cold in their grave / May all of us still serving remember well the price that is paid / May Shane’s memory stand forever as one who went down brave.”

After the ceremony, Behnke took some time to reflect on Britton’s time with Cass County.

“There’s not a lot of us left who worked with Shane,” Behnke said. “Shane was an awesome officer, and he had a very bright future. He went above and beyond in his duties … he had a lot of goals, and I think he would have achieved them. It’s too bad that he’s not here.”

Britton joined the Cass County Sheriff’s Office in March 1999 after serving as a reserve officer in Hudsonville. He died on July 19, 2000. Eighteen years after Britton’s death, his son, Luke, joined the Dowagiac Police Department as a way of carrying on his father’s legacy.

The memorial event has been hosted every year since 2001 in conjunction with National Police Officers Week with the exception of the 2020 event, which was canceled due to the pandemic. Due to rain, this year’s event was held indoors, but dozens still attended.

“It’s great to see the different members of the community and law enforcement that were here,” Behnke said. “I’m sure the weather turned some people away, but it’s still a great group.”