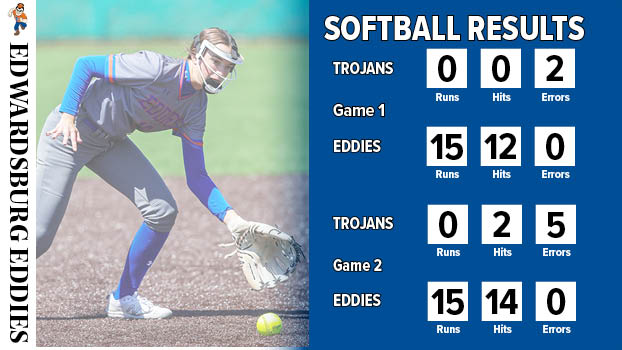 In the first game, Averie Markel tossed a no-hitter.

Samantha Baker and Lexi Schimpa both finished with three hits. Baker homered and drove in three runs, while Schimpa doubled, tripled and drove in a pair of runs.

In the nightcap, Jersie Dawson tossed a two-hit shutout for the Eddies, who improved to 21-7.

The Chieftains were no match for visiting Vicksburg as the Bulldogs defeated Dowagiac 14-9 and 22-8 Tuesday.

The Bulldogs used a seven-run sixth inning to break a 7-7 tie.

The Chieftains finished with 10 hits in the contest, led by Caleigh Wimberley with three, including a double. Emma Allen had two hits and Aubrey Busby homered.

In the nightcap, an 11-run fourth inning turned the game into a route. Heading into the fourth, Vicksburg held am 8-6 lead on Dowagiac.

Sierra Carpenter drove in three runs. Wimberley and Calley Ruff each had two hits. Wimberley and Rebecca Guernsey both doubled for the Chietains, who drop to 11-8 overall.

In the first game, the Vikings were held to two hits by Gianna Kerschbaum. Haylea Wilken doubled for Niles.

In the nightcap, the Vikings finished with six hits, led by Ashlynn Wilken, who was 3-for-4. Chloe Hargreaves added a solo home run.