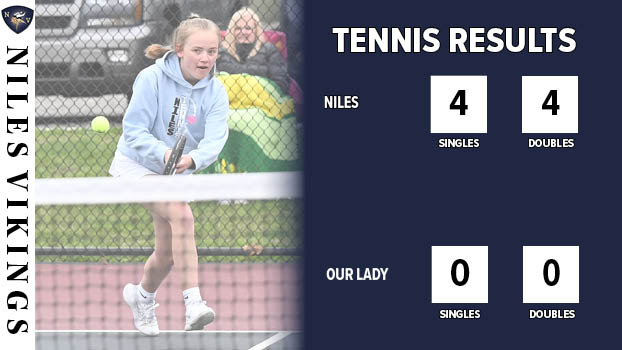 The Vikings blanked Our Lady of the Lakes (formerly Lake Michigan Catholic) 8-0, while Brandywine dropped a 5-3 decision to No. 4-ranked North Muskegon.

The Vikings won all eight flights in straight sets, dropping just nine games in the process.

Adien Martin had the lone shutout for Niles as she blanked Peyton Adams 6-0 and 6-0.

The win squared the Vikings’ record at 7-7, heading into the Division 2 Regional at Three Rivers.

The regional was originally scheduled for Wednesday, but the tournament has been moved to Thursday due to the potential for rain.

The Bobcats tasted defeat for the first time this season as perennial state powerhouse North Muskegon won three out of four singles flights and split the doubles flights with Brandywine.

Cortney Bates picked up the lone singles win as she defeated Francine Vinson 6-3 and 6-2.

Winning in doubles for the Bobcats were the No. 3 team of Chloe Sidenbender and Dani Holden, who defeated August Carefelle and Allie Sonocki 7-5, 4-6 and 12-10; and the No. 4 team of Abagail Solloway and Isabelle Sosnoski, who defeated Jasmine Rottman and Gracie Philpot 6-1 and 6-1.

Brandywine, like Niles, will have to wait an extra day before starting the state tournament.

The Division 3 Regional, which is being hosted by Berrien Springs, has been moved to Thursday due to the potential for rain.