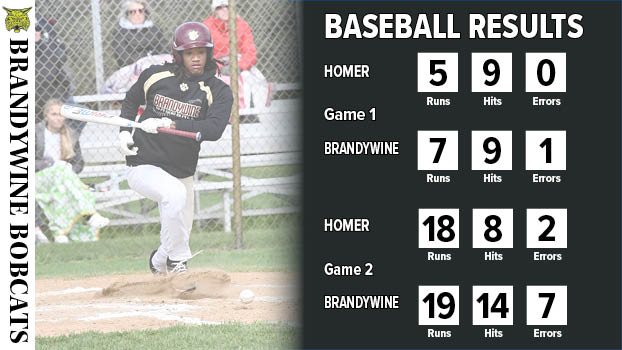 The Bobcats won the opening game 7-5 before completing the sweep with a 19-18 win in the second game.

Host Mishawaka Marian handed the No. 2-ranked Buchanan baseball team its third loss of the season with a 5-4 come-from-behind non-conference victory.

In the opening game, the Bobcats (12-4) used a five-run second inning to take a 6-2 lead it would not relinquish.

Carson Knapp had two hits, including a double, and three RBIs for Brandywine. Owen Hulett and Jamier Palmer also doubled for the Bobcats.

Matt Veach picked up the win with relief help from Jacob Sherrick and Tyler Deming.

Despite a combined 26 walks and nine errors, Brandywine was able to pull out the win as it scored five runs in the bottom of the seventh.

Drew Deming’s bunt single with the bases loaded in the bottom of the seventh capped the five-run rally to give Brandywine the victory.

The Bobcats travel to Buchanan for a key BCS Red Division showdown.

Marian used a pair of hit-by-pitches, a walk and back-to-back singles to score the winning run in the bottom of the seventh against Buchanan.

The Bucks are now 14-3 heading into today’a game against visiting Brandywine.