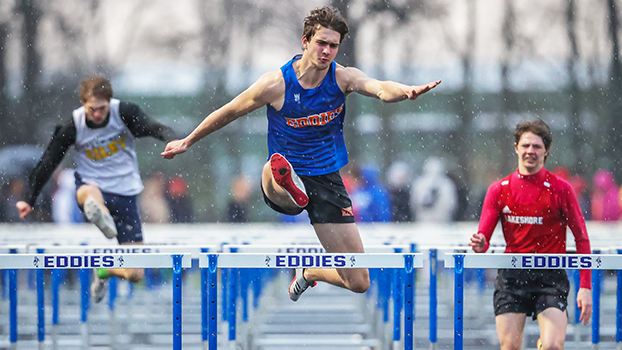 The Bulldog boys team scored 145 points to cruise to the title. Sturgis was the runner-up with 103.5 points, while Edwardsburg was third with 97. Niles finished seventh with 40 points and Dowagiac 10th with 10 points.

Otsego scored 152.5 points two win the girl’s championship over Plainwell, which finished with 104 points. Vicksburg was third with 99 points, while Edwardsburg was sixth with 52.5 points, Niles seventh with 41 points and Dowagiac 10th with 11 points.

The Bulldogs were 9-0 in dual meets this season. Sturgis was 8-1 and Edwardsburg 7-2.

Edwardsburg’s Jacob Pegura won a pair of Wolverine Conference championships as he won the 110 high hurdles with a time of 15.53 and the high jump with a height of 6-1. His teammate, Luke Stowasser, also cleared 6-1, but finished second due to misses at previous heights.

Niles’ best finish came in the 400 relay where it finished second with a time of 45.42. That unit consisted of Julian Means-Flewellen, Peyton Gordon, Kimoni McClean and Antwone Whitelow.

Dowagiac’s top finish was in the 400 relay where the team of Avery Amundsen, Justin Bannow, Isiah Hill and Elijah Clark ran a time of 46.42.

The Bulldogs were also undefeated in girls’ dual meets. Vicksburg was 8-1 and Plainwell 7-2.

Olivia Hansen had the best finish for the Eddies as she placed second in the pole vault with a height of 7-9.

Niles’ best finish was in the high jump, where Marika Ruppart cleared 5-2.

The Chieftains got a third-place effort from Amelia Jones in the pole vault after she cleared 7-6.