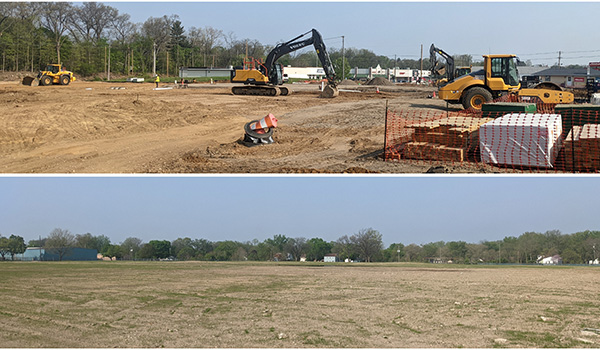 NILES — Two facilities long considered eyesores by residents and passersby are in the process of being repurposed for community use.

The former National Standard property, 901 Howard St., and Niles Inn and Conference Center, 930 S. 11th Street, are in two different stages of development projects put forth by the City of Niles.

The demolition of the Niles Inn and Conference Center space has been completed and the construction of three new commercial buildings has begun. While a completion date is not known at this time, City Administrator Ric Huff said the retail spaces have already been rented out.

“They want them built as quickly as they can,” he added.

During a December city council meeting, Niles city administrator Ric Huff announced that a development company was in the process of purchasing the property with the intention of building three new commercial buildings — one an urgent care center and the other two as additional retail spaces with drive-thru capability — on the property after its demolition is completed.

The National Standard property, which had sat abandoned for more than a decade, was slated for demolition after an October 2020 vote from city council.

The project took approximately six months to complete with the surface capped with topsoil to become green space and the foundations and concrete slabs remaining undisturbed due to ground-level contamination. Though the property will not be used for development projects due to contamination concerns, the property owner will be expected to maintain the property for neighborhood use for the time being.